How Do The Tesla Model X Butterfly Doors Work?

Are you planning to buy an electric car and your attention has landed on Elon Musk's brand and his famous Tesla Model X ? Able to accommodate up to 7 people on board, the electric SUV is a family model par excellence. But that's not all, because it displays top-flight performance and high-end rendering, which leaves no one indifferent. Moreover, the Tesla Model X has an original element, the upward opening butterfly doors. Do you want to know more about how its doors work? Stop moving, you've come to the right place! We take stock in this article.

1 What are butterfly or Falcon doors?

2 How to open and close the butterfly doors of the Tesla Model X?

3 What are they worth?
3.1 The advantages
3.2 Tesla Model X gullwing doors and disadvantages

4 The essentials to remember

What are butterfly or Falcon doors?

Presented for the first time in 2012 and marketed in 2015, the Tesla Model X is the brand's second production vehicle and among its particularities, it is impossible not to mention the Falcon or butterfly doors. The doors of the electric SUV do not open in a conventional way, but rather upwards, like the wings of a bird, hence its name.

The Tesla Model X's butterfly doors open electrically and are equipped with several sensors to adapt to their environment in terms of width and height and to avoid any obstacles. The purpose of its doors according to Elon Musk? Improve access to the rear seats for passengers, whether in the second or third row.

Now that you know a little more about these famous doors, let's move on to how they work!

How to open and close the butterfly doors of the Tesla Model X?

To open the rear doors of your Tesla Model X, you have several options:

the control located inside, on the door pillar;
the Tesla key fob.
the mobile app.
the corresponding icon on the touch screen.
Obviously, before opening the Falcon doors make sure that there are no obstacles around you. In general, they are equipped with sensors that detect the presence of people or objects. Depending on the distance from the vehicle, the opening of the doors will stop or adapt to the environment. This is because the Tesla Model X's gullwing doors may not open as high or wide as intended.

To close the doors, you can press the interior control again or use the key fob, the Tesla mobile app, or the touchscreen. Again, despite the sensors, keep a close eye on the trajectory of the rear doors to make sure they don't hit anything or anyone. 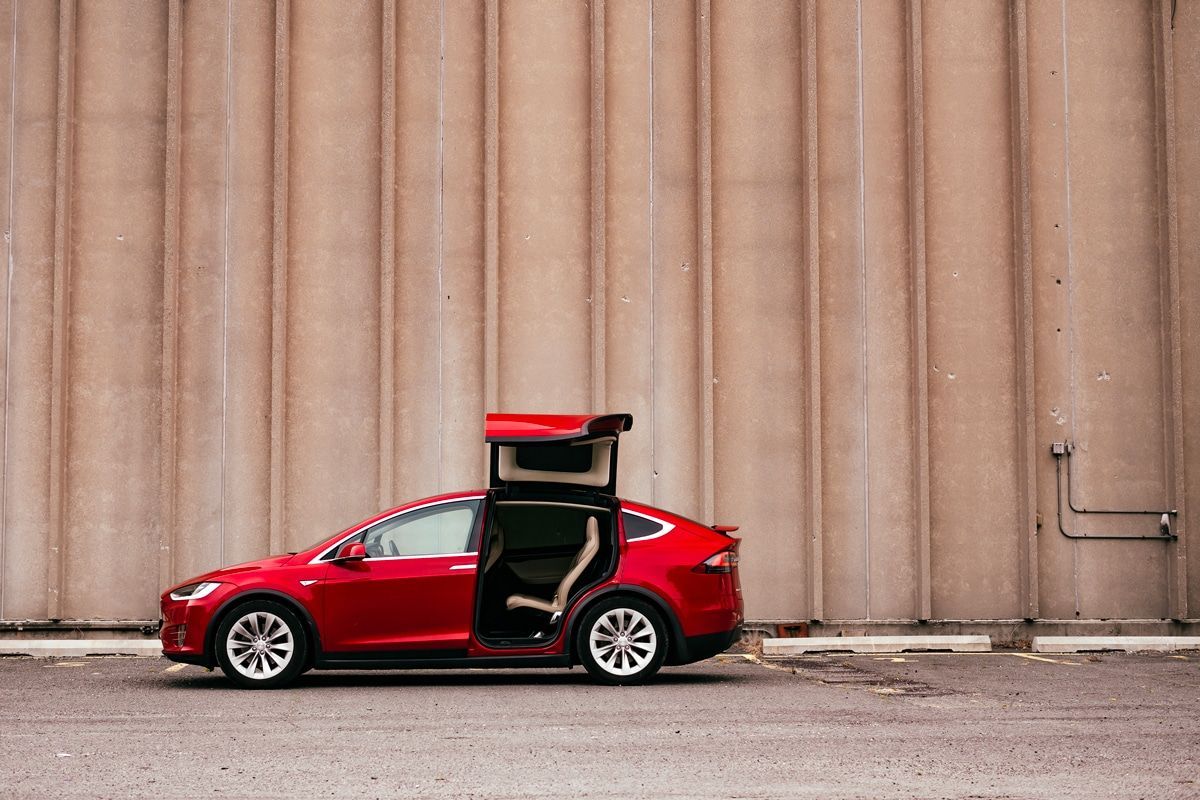 What are they worth?

Benefits
We mentioned it previously, but the main advantage of the butterfly doors deployed on the Tesla Model X is to make access on board easier for passengers wishing to join the second or even the third, a row of seats. Moreover, these doors even allow them to stand up inside the electric SUV, part of the roof lifting with them.

Similarly, the butterfly doors bring a certain "Wow" effect that leaves no one indifferent and gives the Model X a unique side. If you appreciate new technologies and futuristic objects, there is no doubt that the Tesla SUV and its Falcon doors will seduce you.

As we have seen, the doors imagined by the American manufacturer are practical and well thought out, because they are lined with sensors aimed at adapting their opening or closing, all without hitting any obstacles.

And disadvantages of the Tesla Model X gullwing doors
However, do not believe that Falcon doors are exempt from defects.

Indeed, the first models produced on the other side of the Atlantic experienced several sealing problems which hindered the operation of the doors, in particular by damaging internal components. In freezing weather, some Model X owners have also noticed the inability to open the rear doors.

If since its marketing Tesla has been able to correct the problems faced by the butterfly doors, their opening and closing remain more complex, increasing the risk of breakdown. And in the event of an accident, the Falcon Wings system would be difficult to repair and therefore very expensive for any Tesla Model X owner.

Finally, if you have a keen interest in the brand of Elon Musk, you may have already come across a video showing an accident involving the butterfly doors of the Tesla Model X. This is for example the case of this Tesla Model X which hits its door on a bus in London. Remember that to avoid this kind of problem, Tesla has integrated visual and audible warnings when one of the rear doors is open… Fortunately, no one was injured!

The main thing to remember
You are now familiar with the Tesla Model X butterfly doors and we hope this article has been useful to you. If you want to get behind the wheel of the electric SUV, you'll have to be very patient, because the latest version is currently only available in the United States, where production is also experiencing delays. In the meantime, discover in detail the autonomy of the Tesla Model X.

What Does The Interior Of A Tesla Look Like?