English
Home
/
BLOG
/
How much does it cost to charge a Tesla in the United States?

How much does it cost to charge a Tesla in the United States?

If you are analyzing the maintenance costs of an electric car and want to know how much it costs to charge a Tesla in the United States, the first thing you should keep in mind is that the amount to pay will depend on several factors, including the model of the car and the place where the recharge is made.

Below we will explain in detail how much it costs to recharge a Tesla depending on the model, how long it takes to charge, how long the charge lasts, and the cost of solar energy, and we will make price and performance comparisons with respect to gasoline cars.

The average cost of fully charging a Tesla electric car in the US is $13.96, according to national electricity prices, although there are variations that range between $9.62 and $18.30, depending on the model, the capacity of the battery, the type of charger used and the cost of electricity in the area where the vehicle battery is being charged.

In general, charging a Tesla costs about 5 cents per mile ($0.05 per mile), based on the estimated price in the United States of 15.45 cents per kilowatt-hour (kWh). These averages are calculated based on US consumer electricity bill payments.

As we explained before, there are several factors that determine the amount that must be paid when charging Tesla vehicles. Next, we will indicate the cost of charging these vehicles according to the different models offered by the brand.

How much does it cost to charge a Tesla Model X in the USA?

The Tesla Model X and Model X Plaid cost approximately $18.30 and $18.21 to fully charge, respectively, as shown in the chart below.

KWH data is based on the Long Range Plus model 2021 and the Performance model 2021 which are the closest listed by the Environmental Protection Agency (EPA). The national average cost of electricity in the USA taken for the calculation is 15.45 cents per kilowatt-hour (kWh).

Keep in mind that the cost of charging a Tesla electric car is also affected by other factors, for example, the charger you use, the cost of electricity specific to your area, and whether you are fully charging the battery from scratch or No. It is also important to note that charging efficiency is typically 85% at level 2 home charging stations.

How much does it cost to charge a Tesla Model 3 in the United States?

The Tesla Model 3 Rear-Wheel Drive RWD has one of the cheapest charging costs of all Tesla cars, although it otherwise doesn't have as much range as other models.

How much does it cost to charge a Tesla Model S in the USA?

The Model S lineup has Tesla's longest-range vehicles, costing a full charge of $18.29 or $17.98, depending on the model.

The cost per mile is 0.045 cents in both cases since the Tesla Model S Plaid has a slightly lower range than the Tesla Model S. The calculation is based on a national average price of electric energy of 15.45 cents per kilowatt-hour (kWh).

How much does it cost to charge a Tesla Model Y in the United States?

The Tesla Model Y electric car has two versions. While they don't have the range of the Tesla Model S or Tesla Model X, they are cheaper to charge, at an estimated $13.58 to $14.25, depending on the model.

Although this represents significant savings, most new electric car buyers have realized that there is an even cheaper way to charge their Tesla: using solar panels at home.

How much does it cost to charge a Tesla at a supercharger in the United States?

Charging prices at Tesla Superchargers may vary depending on the time of day, the region of the country in which you are located, and local electricity rates, for this reason, the prices indicated below are approximate.

If you bought a Model S or Model X after January 2017 the cost is usually around $0.25 per KW. Similarly, the average supercharger cost of $0.25 per KW also applies to Model 3. It's very important to know that charging is free for cars purchased before January 2017.

IMPORTANT: The specific prices of each supercharger station are shown in the popup window of the selected pin on the touch screen.

If you have participated in any referral programs through Tesla, you could have free supercharge miles. If you want to check how many free Supercharge miles you have available and their expiration date, you can do so in the Tesla app.

Remember that superchargers are ideal for long-distance travel. They are designed to charge Tesla vehicles quickly, so drivers can get back on the road as quickly as possible. However, for daily commuting or local driving needs, it is recommended to charge at home.

How much does it cost to charge a Tesla at home with a solar charging station?

Charging a Tesla electric car can be even cheaper if a home solar power system is installed. However, it is important that you know that not all houses are adapted to solar panels.

If your home is retrofitted with solar panels, solar power can be produced for as little as 5 cents per kilowatt hour. This will allow you to charge your Tesla for 35% of the costs quoted above. In addition, you can reduce the cost of electricity in your home.

We can then say that it is almost 35% less than the national average cost of energy and less than a third of the cost of grid energy.

In states like California, Massachusetts, New York, and New Jersey, where electricity rates are much higher than the national average, it can be even 65% cheaper to recharge a Tesla with solar energy at home, instead of using electricity from electricity. the net.

It is true that this calculation does not include the cost of investing your money, but with interest rates on deposits close to zero, the figures would not change much.

How much does it cost to refuel a gasoline car compared to charging a Tesla?

A study by the University of Michigan found that the average cost of running an internal combustion engine car was nearly $1,117 a year. Electric vehicles, on the other hand, were estimated at an average of $485 per year.

An important aspect to consider is autonomy. For example, fueling a truck that only gets 14 mpg is not the same as fueling a sedan that gets more than 40 mpg. Also, keep in mind that in some parts of the country the cost of fuel is much higher than average.

Calculation of fuel and electricity consumption of a car

Each vehicle has a cost associated with the fuel it uses to run. For example, to calculate the consumption of gasoline cars,

we must take the number of miles traveled, divide it by the estimated MPG ( Miles per Gallon ) of the vehicle, and multiply the result by the price

of gasoline per gallon.

Now, to calculate the consumption cost of a vehicle's

electrical we must apply a different formula. In this case, the price per kilowatt hour (kWh) of electricity is used, rather than the price per gallon of gasoline. Miles per kWh is also used instead of miles per gallon.

Although electric vehicles do not burn gasoline, the Environmental Protection Agency ( EPA ) still uses the term MPGe, miles per gallon

The US Department of Energy uses the term eGallon to compare the cost of using electricity to power a vehicle compared to a similar model that requires gasoline.

The time it takes for a Tesla to charge will depend on the method used. Here are some common ways to charge a Tesla:

What are the variables that affect the charging speed of a Tesla?

In the case of gasoline vehicles, the filling speed depends on the flow of the dispenser and the number of cars that are refueling at the moment. The speed of an electric charger is subject to many more variables that affect how quickly a Tesla battery charges.

These are some of the variables that affect the charging speed of an electric car:

Room temperature
Colder temperatures affect a battery's electrochemical reactions, so the rate of charge slows as the mercury drops. Similarly, autonomy is negatively affected by the cold.

charger type
The type of charger determines whether it is a quick stop (30 to 50 minutes depending on the model) or several hours. Level 3 chargers are the fastest, while Level 1 chargers are the slowest.

Vehicle battery size
Electric vehicles are offered with a variety of battery sizes, an electric vehicle's battery capacity (measured in kilowatt-hours) determines the charging rate. For example, the Tesla Model S and Model X are available with a 100 kWh high-capacity battery, while the base model Hyundai Kona's battery is 39.2 kWh.

Vehicle battery depletion
A fully depleted battery will charge more slowly than a half-full one. To ensure battery longevity, your system must slow the flow of power.

Time of the day
Depending on where you live, your power supply may be affected by the time of day you charge your electric vehicle. Peak usage hours can slow down a charger as more electricity is drawn from the grid.

Other costs of Tesla vehicles

Beyond the cost of a Tesla, there are other expenses associated with owning this type of vehicle, but perhaps not as many as you might think. Broadly speaking, you'll likely pay a little more for electric car insurance than for an internal combustion vehicle.

However, you will save money on maintenance since electric vehicles have almost no wearing parts, other than tires or rims. For example, you will not have to worry about changing oil, filters, etc. Also, if you decide to invest in solar panels for your home, you can further reduce charging costs.

Tesla chargers
The Tesla Supercharger system has more than 35,000 chargers that form a network of Tesla charging stations, located on the main roads of the United States and many countries.

Tesla Superchargers offer the fastest way to charge the battery of these vehicles.

The average recharge time is as follows:

Tesla Supercharger near me
On the map below you can easily find the closest Tesla charging stations to your current location in the United States. 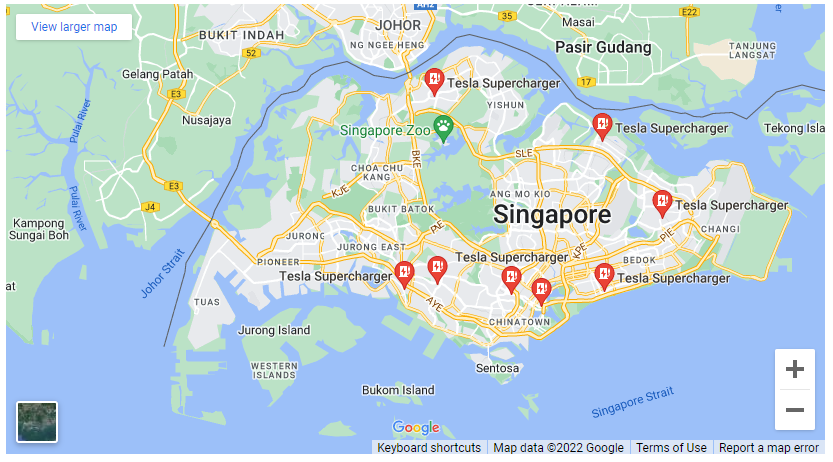 Advantages and disadvantages of an electric car
The positive side of electric vehicles is that they are much cheaper in terms of consumption than internal combustion. In addition, they can save you a lot of time by allowing you to recharge at home. On the other hand, they are much better for the environment and have shown that they can be competitive in terms of power and performance.

As a disadvantage, recharging networks can be complicated at first and you will always have to plan your times due to the delay in the charging process.