English
Home
/
BLOG
/
The American Professional Team Disassembles The 4680 Battery Pack Of The Tesla Model Y, And The Secrets Are All Revealed

The American Professional Team Disassembles The 4680 Battery Pack Of The Tesla Model Y, And The Secrets Are All Revealed 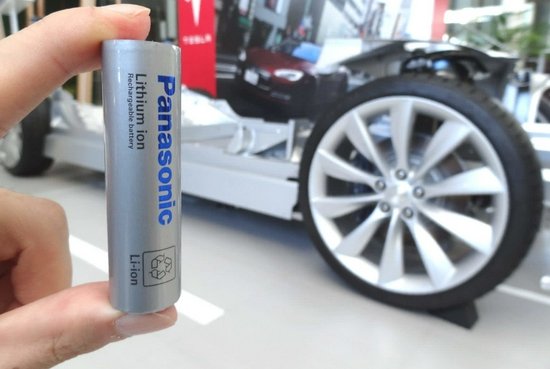 How hard is Tesla's 4680 battery pack to remove? It took the disassembly team two full weeks to remove the top cover from the battery pack.

According to the autorevolution website, the latest discovery is that the team originally thought the entire 4680 battery pack did not contain fasteners, but in the end, they still found 16 small threaded fasteners in the 4680 battery pack. Team leader Sandy Munro said too many fasteners are prone to assembly errors, so it's a good thing Tesla has eliminated that weakness.

In September 2020, Tesla launched the "epoch-making" 4680 cylindrical battery. Tesla said that compared with the traditional 2170 cylindrical battery, the 4680 battery is larger in size (46mm in diameter and 80mm in height), and uses electrodeless (that is, full-pole) and dry battery electrode technology, so that the energy will be the former. 5 times, the cruising range of the vehicle will be increased by 16%, and the power will be increased by 6 times.

According to reports, Sandy. Monroe is a former Ford Motor Company engineer. In 2018, he and his colleagues purchased and disassembled two Tesla Model 3s at their own expense, and gave Musk a lot of advice on the body design of the Model 3. At present, the team has dismantled hundreds of cars from Audi, BMW, Chevrolet, Jaguar, Nissan, and other car companies, and Tesla's Model S, Model 3, and Model Y (2170 battery version) have not been spared. 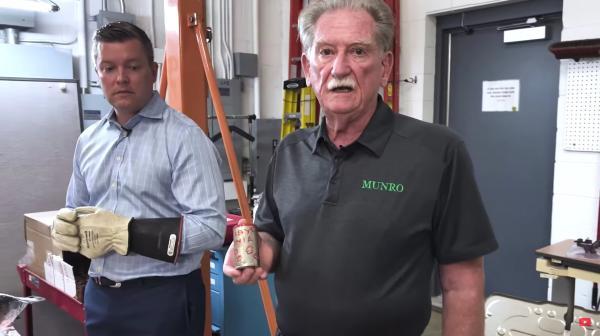 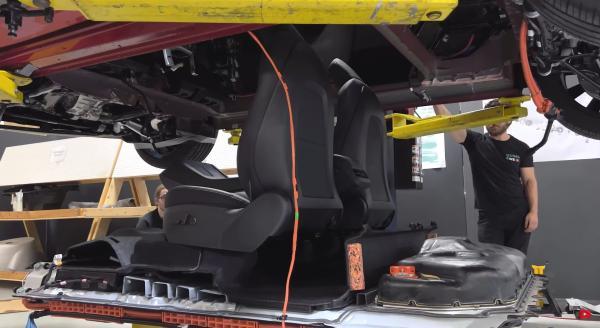 The entire 4680 version of the Model Y battery pack + front seat assembly + rear PSC high and low voltage control module weighs only 1198 pounds (about 543kg), the total weight of the Tesla Model Y 4680 battery pack without the seat is not To 500kg, considering that the total energy of the battery pack is about 80kwh, the ratio of weight to energy is surprising.

This step was easy, but then the team ran into big trouble. "Removing the battery is like archaeology," said one team member.

It took them two full weeks to remove the cover from the 4680 battery pack. The team expected to see rows of cells directly, but they were surprised to find that the battery cells and other key components were swallowed by a pink foam that was "hard as a brick". 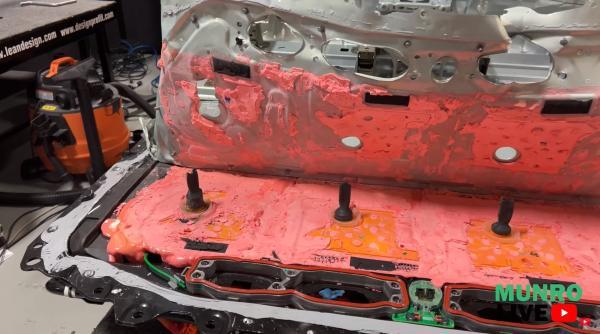 These pink foams are actually polyurethane glue. The team found that the 4680 battery pack uses glue as a whole to fix the cells and components. This pink glue is used in such a large amount that it not only fills the surface but also completely fills the inner space of the cell.

According to reports, the glue mainly plays two roles, one is force and protection, the glue will integrate all the cells and components into a whole, and bear the force together, and the glue is elastic, can absorb energy, and then protect the cells; The second is to fix the cells. Since the 4680 cells are cylindrical, there are many gaps between the cells. The battery pack eliminates the need for traditional modules, and there are more gaps between the cells. Glue can fill these gaps. full, to prevent the position of the battery cell from loosening. However, these pink glues are highly viscous, so it is quite laborious to disassemble. The Musandi team thought of using dry ice to remove the glue. 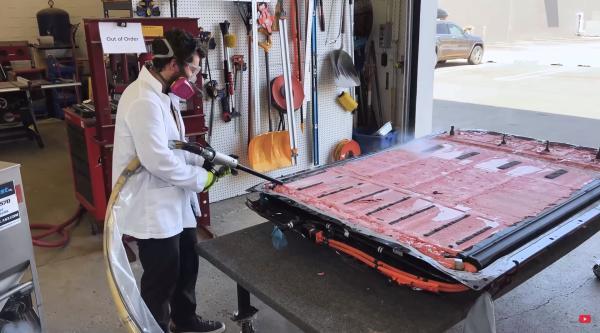 A week later, Sandy and his team took out the polyurethane foam with a dry ice blaster and saw the cell arrangement for the first time.

The uppermost part of the battery pack is a cover plate of a layer of flexible nylon material with a honeycomb structure, and the wiring harness of the voltage sampling and temperature sensor is integrated into it. 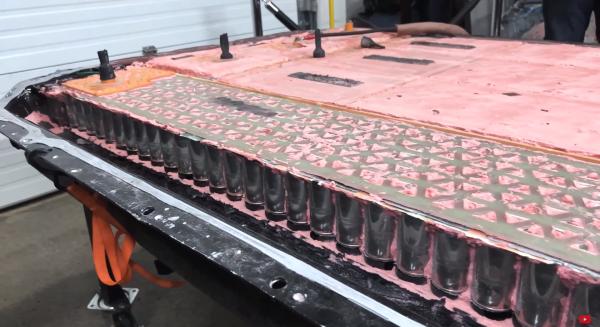 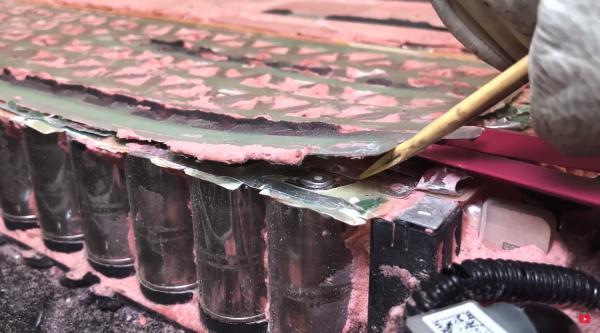 The lower layer is a current collector that connects the cells in series and parallel. Between the cell and the current collector, different from the aluminum wire bonding welding used in the previous 2170 battery pack, the 4680 battery chooses laser welding, which eliminates the problem that the current collector may fail due to the usual wire connection. 9 cells are connected in parallel into a group, the positive poles of each group of cells are all connected, and then aggregated to the negative pole of the next group of cells. Due to the design of the electrodeless lug (full lug) of the 4680 battery, only the pole is a positive pole, and the surface shell below the pole is all negative poles. Therefore, the current collector is designed in the shape of a branch. 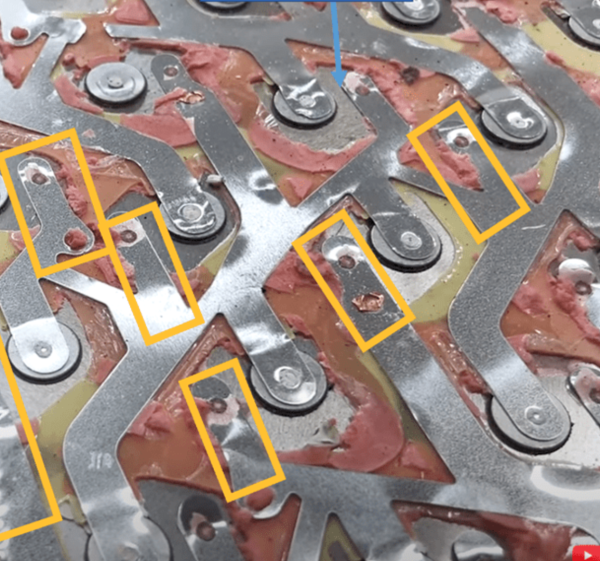 Pay attention to the small copper pieces on these solder joints. According to reports, this is the VSH (Voltage Sensor Wire Harness) solder joint, which connects the cells to the battery management circuit board, and can monitor the voltage and temperature of each cell.

The next layer is the battery. The entire 4680 structure battery pack includes a total of 828 cells, which are divided into four areas by three separators, which are made of phenolic resin or high-density polyethylene. According to Tesla's previous introduction, the 4680 battery pack completely canceled the traditional module, but in fact, Tesla just canceled the traditional physical partition. Such a design is also completely unexpected by Sandy, who believes that "the benefit of this design is that it reduces the chance of thermal runaway." 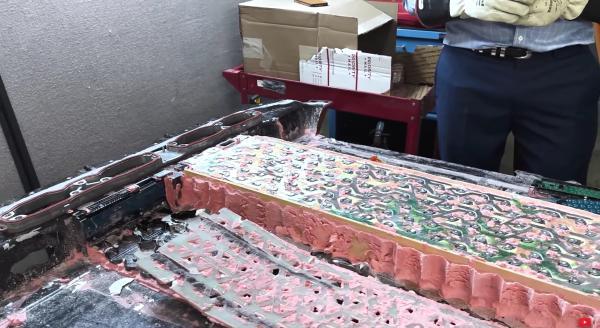 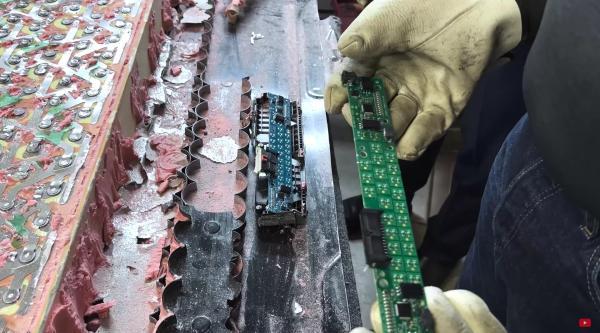 Team member Cory Steuben (Cory Steuben) introduced, "If there is an overcharge problem, the whole body is exhausted downward."

On one side of the battery pack, the team saw four BMS battery management system circuit boards, sealed and protected by polypropylene plastic pieces. On the previous Tesla Model Y/S, the BMS was located at the bottom of the battery pack. The electrical part of the entire battery pack is covered by an orange plastic plate, and the communication line is connected to the BMS through the top pipe.

After dismantling the entire 4680 battery pack, the question arises, can such a battery pack be repaired? In Corey Steuben's view, the possibility of repairing Tesla's CTC battery pack (Cell to Chassis, battery body integration technology) is almost zero from the point of view of the glue pouring technology. Because maintenance involves complex procedures such as gluing, re-filling, and sealing and waterproofing testing, it is not cost-effective.

The structure of the entire battery pack also imposes strict requirements on the process stability and production efficiency of battery manufacturers. This may explain to some extent why the 4680 battery has not been mass-produced since its release in September 2020. It is understood that the current 4680 battery packs are only produced in small batches by Tesla's Kato Road factory in California and Austin, Texas. South Korea's LG New Energy and Japan's Panasonic have said that mass production will not be until next year.

The idea was confirmed by Elon Musk.

"No problem recycling 4680 battery packs," Musk tweeted after watching Sandy's live video, "Just think of any battery pack as a super-premium ore - it's better to start with a high-grade ore than a low-grade ore. Good!"

How does it work? Sandy's idea is to throw the entire battery pack directly into liquid nitrogen near absolute zero, "the battery pack will freeze, and then it will be crushed into very fine pieces by a grinder, and substances of different densities will be in the liquid. It floats in nitrogen, so you can recycle all the material in the battery pack,” Sandy said.