After Corona Dampers In China: Tesla Hopes For A Record Half-year 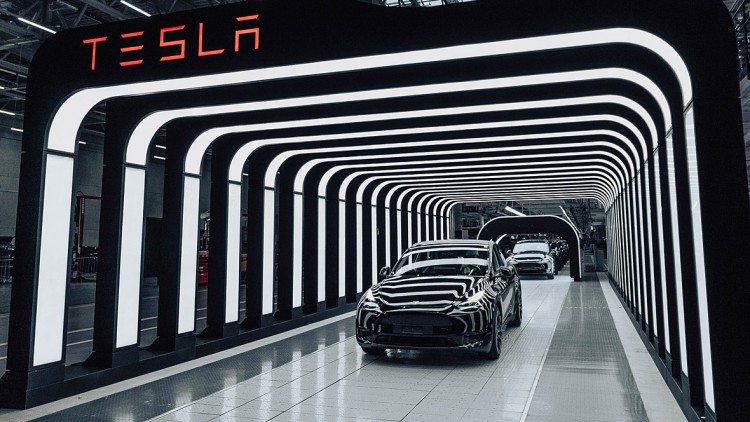 Corona break in China, material shortages, chaos in global supply chains, and high costs - Tesla actually had a lot of problems in the most recent quarter. Nevertheless, the e-car pioneer continues to earn brilliantly. There was also a surprise when it came to Bitcoin.

Tesla was slowed down in the past quarter by corona lockdowns in China and supply chain problems. For the second half of the year, however, the electric car pioneer expects a return to the record course. The ambitious goal of delivering around 50 percent more cars in 2021 remains. The demand for Tesla's vehicles is unbroken, emphasized company boss Elon Musk.

In the second quarter, Tesla beat analysts' expectations for earnings. Thanks in part to strong price increases, the electric car manufacturer earned a total of 2.3 billion dollars, 98 percent more than a year ago. In the first quarter of this year, however, the result was still at a much higher $3.3 billion.

Tesla increased sales by 42 percent year-on-year to $16.9 billion. At the same time, Tesla only brought 254,695 vehicles to customers in the second quarter - the first decline compared to the previous quarter in around two years. Growing sales by 50 percent this year has become more difficult, but it's still achievable if done right, CFO Zach Kirkhorn said in a conference call with analysts on Wednesday. Tesla currently sees no weakening of demand due to high inflation and the weakening economy.

Because the company is assuming a "record-breaking" second half of the year. In Tesla's large US car plant in Fremont and in Shanghai - where there were recent failures due to China's corona lockdowns - the highest monthly production rates to date have recently been recorded, Tesla explained.

The European factory in Grünheide near Berlin is also gradually getting going. Here, 1,000 Model Y vehicles rolled off the assembly line in just one week, which Tesla described as an "important milestone". In May, Musk complained about problems with ramping up production in Grünheide and in the new US plant in Austin and described the locations in an interview as "gigantic money incinerators".

Tesla shares rose a good one percent at the start of pre-market trading on Thursday. In an initial analysis of the figures, the car expert Ferdinand Dudenhöffer referred not only to the price increases but also to a savings program in terms of development costs. "With the successful ramp-up of the new plants and the elimination of the current start-up weaknesses (Grünheide, Austin), Tesla is a very cost-efficient car manufacturer," he summed up.

Musk also called the prices "embarrassingly high" and pointed to inflation and raw material costs as triggers. He hopes that Tesla will be able to lower them "a little" over time. Tesla fared much better than other carmakers due to the parts shortages, including chips in the corona pandemic. Musk has been going through a kind of "supply chain hell" for years.

Tesla delivered surprising news about its Bitcoin investment: According to the annual report, the company had sold around 75 percent of it at the end of the quarter, which increased the cash balance on the balance sheet by $936 million in the past quarter. In 2021, Tesla invested around $1.5 billion in the oldest and best-known digital currency, which caused a stir at the time. A part was sold again a short time later. Like the entire market for crypto assets, the Bitcoin price collapsed massively in the past quarter.

Musk described the Bitcoin sale in a conference call with analysts and investors as a reaction to the difficult situation in Shanghai. "It was important for us to maximize our cash position given the uncertainty surrounding the Covid lockdowns in China," he said. The sale took place because Tesla's management was unsure how long the situation there would last. In April, a mandatory notification to the US Securities and Exchange Commission stated that Tesla believes in the long-term potential of digital assets - both as an investment and as a liquid alternative to cash. The recent sale should not be seen as some kind of "judgment" about Bitcoin, Musk stressed.

Tesla's lucrative trade in pollution rights, which other automakers need to improve their carbon footprint, no longer played quite as big a role. In the first quarter, the e-car pioneer had turned over 679 million dollars, in the past quarter it was only 344 million. Although Tesla raised prices several times this year, the profit margin in the auto business fell to 27.9 percent. In the previous quarter, it was still 32.9 percent, a year ago it was 28.4 percent.