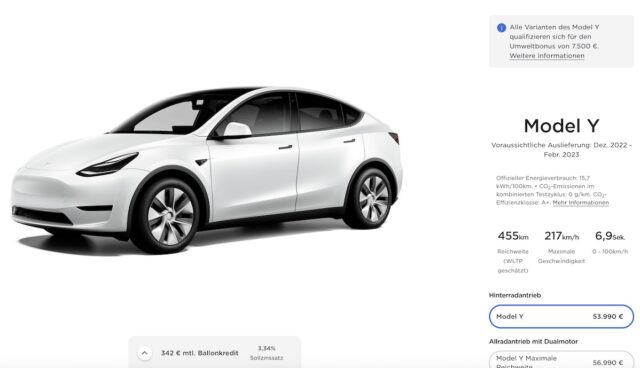 Last week, Tesla officially made a new base version of the Model Y available in European markets. Since then, the version with rear-wheel drive and a smaller battery can be ordered from the Gigafactory in China (see photo), which, like the others, is to be delivered from the end of the year. However, the prices selected for this invite you to puzzle: Nowhere is the distance to the next larger Model Y Long Range as small as in Germany, and in almost no other country in Europe does the smallest Model Y cost as much as here.

Price differences at Tesla in Europe

For the new Model Y without an official surname (unofficially it's called RWD), Tesla gives a price of 53,990 euros in the German configurator without extras and fees. You have to add 2975 euros to this because Tesla already deducts the manufacturer's share of the German environmental bonus from the prices shown. Either way, there is a very small difference to the Model Y Long Range: with all-wheel drive and around 100 kilometers more range, it only costs 3000 euros more. In contrast, the surcharge for the performance version with the same battery is 8500 euros.

At the same time, Tesla has set the German price for the smallest Model Y high. In the euro area, it costs everywhere less than in Germany, according to samples for the most important markets, starting with 49,990 euros in the Netherlands and France, i.e. around 7,000 euros less than in Germany. Within the EU, there was only one country with an even higher price: In Denmark, the Model Y for beginners costs the equivalent of 60,500 euros. The country is known for its high new car taxes, which in combination with the German environmental bonus meant that many German Teslas were sold thereafter the six-month ownership period had expired.

In Norway, the country with the largest proportion of electric cars in the world, the smallest Model Y also costs significantly less than in Germany at the equivalent of 53,250 euros. Another non-EU country, Great Britain, has a higher price, in this case, the equivalent of around 61,000 euros.

Apparently only in Denmark with its high taxes and in Great Britain, which has left the EU, do you have to pay more for the basic version of the Tesla Model Y than in Germany. The price difference to the Long Range variant is not as pronounced in any country as it is in this country with only 3000 euros. Another anomaly is that the middle Model Y costs even less in Germany than the corresponding Model 3, which was not the case in any of the other eight countries examined. An imminent price increase for the Tesla Model Y LR, which is now also being produced in the German Gigafactory, would not be a surprise.