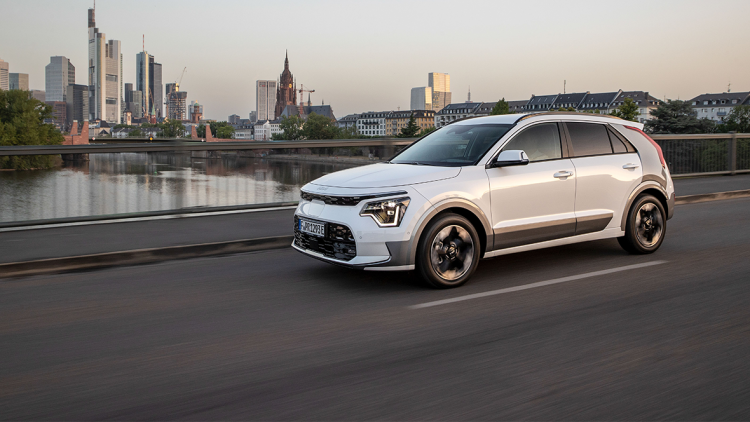 The Kia Niro was an alternative from birth. The second generation is now coming exclusively with a green drive - and a much cooler look.

Hardly any other manufacturer drives as consistently on the verge as Kia. There are currently 17 model variants with electrified drives in the Korean garage. The reward for the electricity initiative: behind Tesla, Kia is in second place among all e-providers in Europe and has recorded a whopping 19 percent growth in Germany. There's really tension under the roof.

With the Niro of the second generation, a journeyman has now been added who was an alternative from birth. The first Niro (from 2016) was already available as a hybrid, plug-in hybrid, and from 2019 also as a fully electric EV. These three drives are now back on the price lists.

While not much has changed on the drive side of the classic hybrid, we note a larger battery (11.1 instead of 8.9 kW/h) and a purely electric range of up to 65 kilometers for the plug-in hybrid. But let's take a closer look at the Niro EV. After all, Kia expects the Stromer to sell 70 percent of the total.

Niro II stands on Kia's third generation of the K3 platform. He's grown a bit, length is now 4.42 meters, plus 6.5 centimeters. The wheelbase also increases slightly to 2.72 meters (plus 2 cm), which improves the already good space, especially in the back seat.

Visually, the Niro makes a much bigger leap. The design is not only completely new but also much cooler and bolder than before. The edgier look is based both on the show car Habanero and on the bigger brother Sportage. From the Habanero, the new Niro inherits the jagged line of the daytime running lights, derived from a heartbeat curve. Kia appropriately calls this style element the heartbeat signature. The newly interpreted tiger nose also has its finger on the pulse. If desired, the wide C-pillar can be color-contrasted and allows the airstream to flow through. There are nine different exterior colors and 32 color combinations, depending on the market.

The trunk with a height-adjustable loading floor now holds 475 liters (+ 24 liters), so a lot fits in from holiday luggage to the evil mother-in-law. Really clever: The flexible trunk cover can be folded up like origami and carried in a small bag. In the part-time job, it also serves as sun protection. At the front, we find another 20-liter storage space, called Frunk, which accommodates the charging cables. A vehicle-to-device adapter serves as a 220-volt socket (up to 3 kW), supplies mobile phones with fresh juice, or gets the ghetto blaster at the quarry pond in a party mood. For the first time, the new Niro can also hook drinks and party tents up to 750 kilos.

Pretty much everything you see and touch inside is new. The front seats are now 30 percent slimmer, so backbenchers don't feel so cooped up. Much is reminiscent of the big electric brother EV6. For example, the two 10.25-inch displays, or the controlled display below, which can be assigned twice, and which switches between infotainment and air conditioning functions by touch. Software updates will be done “over the air” in the future.

Of course, there are plenty of helpful assistants on board and the green conscience always goes with you. The headlining of the new Niro consists of 56 percent recycled paper fibers, the seat covers are made of bio-polyurethane with portions of eucalyptus leaves. The processing also seems to be really sustainable. Everything fits, nothing rattles. With a lower weight, the body is said to have gained significantly in rigidity through the use of high-strength steels and is also said to be better at insulating noise.

Thumbs up after the first test kilometers. Especially in the almost silent electric drive, rolling and wind noise are usually doubly annoying. Not so with the Niro EV. The compact SUV rolls along remarkably quietly. In general, the guy leaves his inmates alone. Even in Sport mode (there's also the Evo, Comfort, and Snow programs), it's not too annoying, as it wants to get families from A to B as comfortably as possible and not win any races. Although there is quite a bit of power in the compact package. With 150 kW/204 hp, the performance remains the same, which is always enough for real propulsion. The Niro sprints to 100 km/h in 7.8 seconds. It really doesn't feel like a slow train on a family trip.

The battery capacity increases slightly from 64 to 64.8 kW/h, the maximum range by 8 to 463 kilometers. In the city savers roll more than 600 kilometers with one charge - says Kia. Also pretty clever: In order to shorten the charging time, the battery can be pre-conditioned. This means that the driver enters into the navigation system when and where he wants to charge and then arrives there with the optimum battery temperature. In the best case, the Niro should be able to charge its cells from 10 to 80 percent in 45 minutes.

So the bottom line is that the Niro EV starts with a pretty attractive overall package. Comfortable, quiet, environmentally friendly, and not too expensive. It costs 47,590 euros, minus the innovation bonus of 9,570 euros. In addition, Kia continues to grant a seven-year warranty, including on the battery. Anyone who votes green should have Kia on the ballot.

After Corona Dampers In China: Tesla Hopes For A Record Half-year