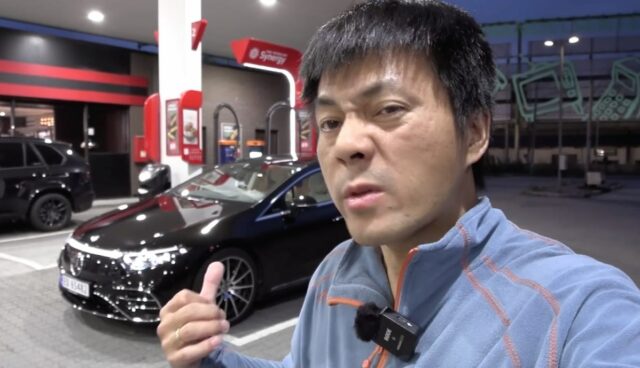 The Norwegian YouTuber Bjorn Nyland was able to show for the first time recently that covering 1000 kilometers with an electric car doesn’t have to take longer than with a combustion engine – however, he used the Nio ES8, the first in Europe to have the battery in special stations can change. But now he has managed almost the same time without changing the battery: With the Mercedes EQS 450+, Nyland needed 9 hours and 5 minutes for the distance on Norwegian and Swedish motorways - five minutes more than with the Nio and ten minutes less than with the previous record holder Tesla Model 3 Performance.

On the one hand, Nyland is very precise in his tests, on the other hand, he allows himself some discretion. He does not take the distance driven from the speedometer of the respective electric car but measures it himself using GPS data. On the other hand, he already deducted a few minutes from his Nio test for an aborted exchange attempt. And with the Mercedes EQS, he now had to take a detour, reduce the speed to below the targeted 120 km/h due to heavy traffic in the left lane and wait once in front of the store, which he also roughly counted towards the total time.

In view of its data, it was to be expected that the German electric car would achieve a good result. According to WLTP, the Mercedes EQS in the 450+ version with rear-wheel drive clearly has the longest range of all models available in Europe - according to the configurator up to 764 kilometers. In addition, there is a charging capacity of up to 200 kilowatts. That's not as much as the up to 250 kilowatts at Tesla, but a presentable value.

Before the start, Nyland is looking forward to the 1000 kilometers ahead of him because he recognizes “real luxury” in the interior of the Mercedes EQS. So the route will be a pleasure. But then the experienced electric car YouTuber first encounters something that he abbreviates as LAL when using the navigation system: Legacy Auto Maker Lag. So it takes an uncomfortably long time for the system to finish optimizing a route, and that's over typical of electric cars from established manufacturers in his experience.

"Go Home Tesla"
Not necessarily common, however, is that Nyland is enthusiastic after the drive despite the software weakness. The Mercedes EQS is "a beast," big and luxurious, yet remarkably efficient, he says. The tester determined the consumption to be 220 watt hours per kilometer, only around 8-watt hours more than the Tesla Model 3 Performance, which previously held the record in the Nyland tests at 9 hours and 15 minutes in July 2020. "Go home, Tesla," he comments on the replacement at the top, which after the criticism of the Mercedes navigation system is more likely to be understood as a joking provocation. In any case, the test showed that electric cars with a sufficiently large battery and high charging capacity do not actually need changing stations, says Nyland.