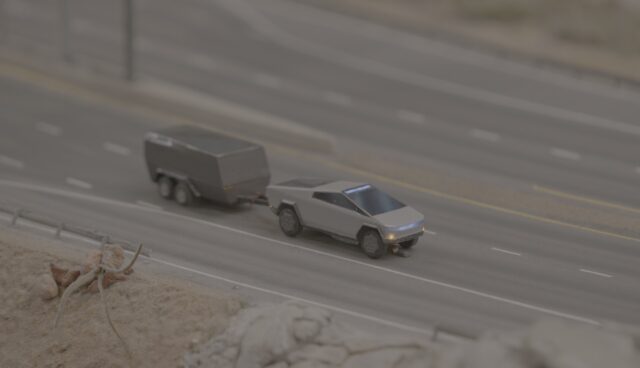 With its loving and detailed replicas of objects and scenes from the real world in small format, the Miniatur Wunderland in Hamburg is a popular attraction and a crowd puller - for example, it was voted Germany's most popular attraction three times in a row, catching up with Neuschwanstein Castle. With more and more new additions, the operators also ensure that things don't get boring in their mini world. And as they announced on Twitter this week, to the delight of Tesla friends, the first cyber track is now driving through the downsized USA.

In order to be able to convincingly recreate the world on a small scale, one must have studied it well on a large scale. In their Cybertruck presentation on Twitter, the Wunderland operators showed this, for example, by the fact that the Tesla pickup's drive through a rural US scene was accompanied by the music that is otherwise used in the light and door show of the real Model X runs. He also pauses once to let a bus through, and that's accompanied by a tone Tesla drivers know as an autopilot warning.

Unlike the previously known real prototypes of the Tesla Cybertruck, the miniature already has turn signals, as @MiWuLa wrote about in the video. You can see them activated on both sides in another scene: The cyber track with a trailer is standing on the side of the road together with other vehicles because model fire brigade cars are fighting a fire made of LED lights on the other side.

With a view to the self-designed turn signals, @MiWuLa asked Tesla boss Elon Musk whether they roughly corresponded to the upcoming original. The operators wrote that they would be happy to provide information on this but initially received no personal answer from the CEO. Otherwise, however, the Twitter echo was pronounced and positive with around 1000 likes. Connoisseurs of the wonderland informed that there are also small charging stations from EnBW and a smart fleet from car2go from the world of electric cars.

When asked by, the spokesman for Miniature World correctly pointed out that all vehicles there had been electric from the start. But the topics of energy transition and sustainability would also play a major role in terms of content. Because fortunately, a lot has happened in the real world in this regard recently, the wonderland is currently being retrofitted: Fast charging stations from EnBW and Tesla are to come soon, possibly an Ionity station and certainly many 11 kW columns. More electric cars are also planned, all of which would have to be built in-house because they are not yet available on the model market.

Paying Less Than 50,000 Euros For A Tesla Is Already Possible In Spain