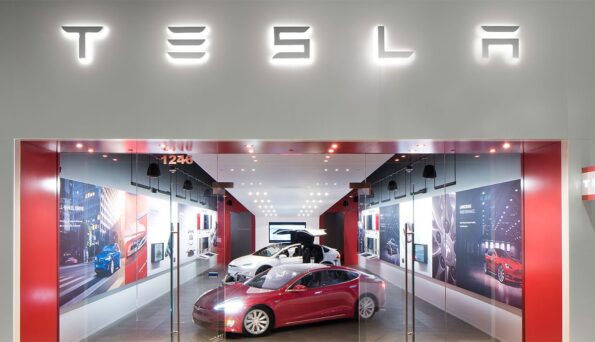 Anyone who had a Tesla share in their depot after the close of trading on Wednesday now has three of them. Because on this date, the split was completed in a ratio of 3 to 1, which the company had prepared at its general meeting in early August and announced shortly thereafter. So Tesla's value remains the same for now, but it's spread across more shares, so each share costs less than before. However, a first analyst has already raised his price target - not because of the split, but because he likes the progress made in Tesla production in China.

During Wednesday's trading, Tesla stock gave little indication that anything would happen to it afterward. The price initially managed to briefly exceed $900, but then collapsed, leaving an increase of 0.2 percent to $891.29 in the end. For every third share after that, the calculated price is just over $297. The current market capitalization of Tesla, i.e. all shares together, is around 930 billion dollars with and without the split.

However, according to analyst Dan Ives of Wedbush Securities, there could soon be more. Probably the first after the split, he published a new price target for Tesla on Wednesday, which already takes into account the tripled number of shares. Previously, Ives had forecast $1,000 per Tesla share, resulting in an adjusted 3-to-1 split of $333.33. Instead, he now sees it rising to $360, which would have been $1080 before the split.

In a tweet, Ives cited increased production at the "crucial" Gigafactory in China as the only justification for his higher Tesla target. This can already be seen in the current quarter and further dynamic development can be expected for the rest of this year. In July and early August, Tesla upgraded its Chinese factory again with the goal of increasing its capacity to 14,000 Model Y and 8,000 Model 3 per week, or a good 1.1 million electric cars per year.

A visually lower price and thus easier tradability are generally cited as the motivation for stock splits. Initially, this does not fundamentally change the valuation of a company, but experience shows that the market does not always follow this theory. Tesla made its first share split at the end of August 2020, at that time in a ratio of 5 to 1. On the first day after the split, Tesla shares rose by around 12.5 percent (to just under 500 dollars, which seems small again today). At that time, however, the stock market environment was friendlier and Tesla was about to be included in the important S&P 500 index.