English
Home
/
NEWS
/
How Much Does It Cost To Catch Up With Tesla?

How Much Does It Cost To Catch Up With Tesla? 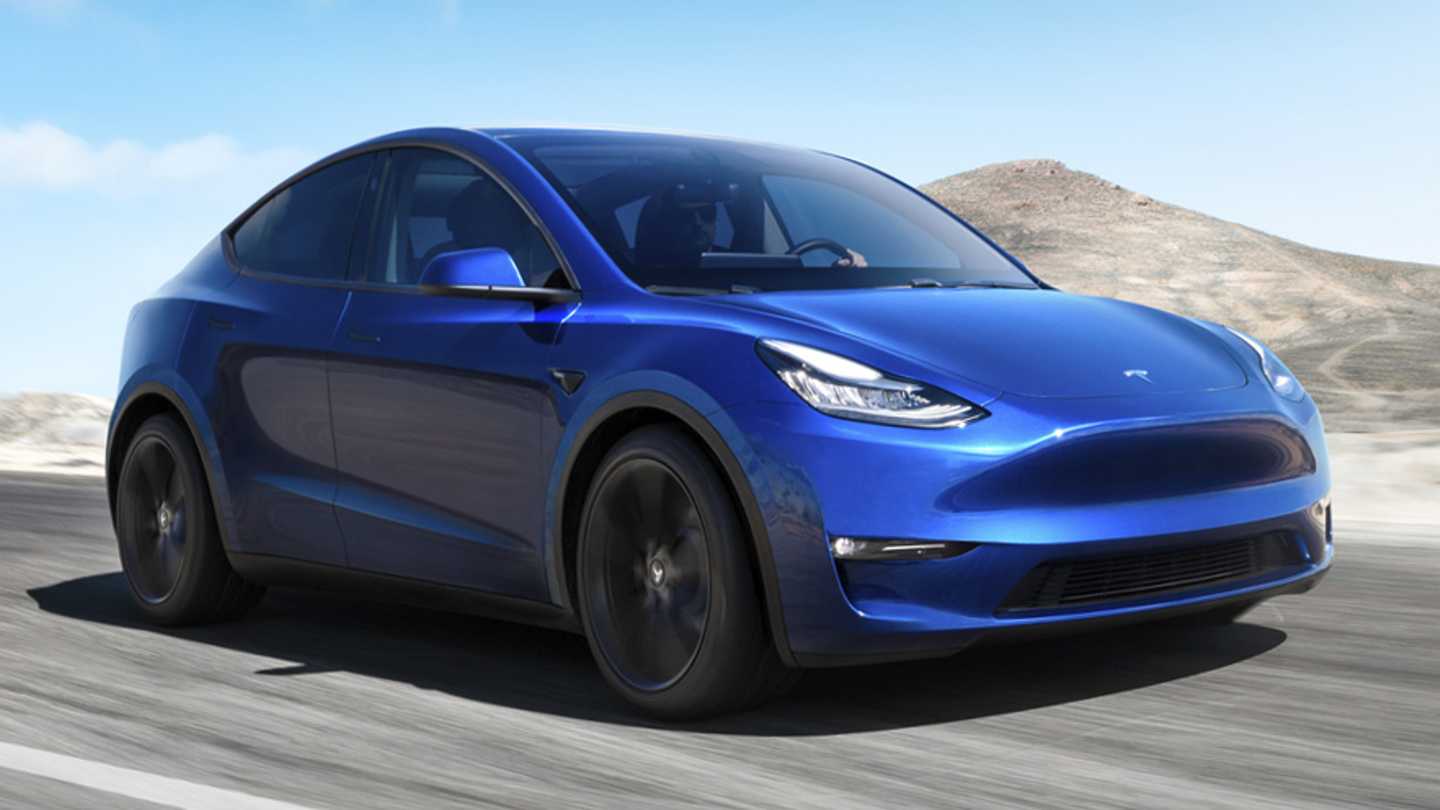 On April 20, Honda made a high-profile exit, preparing to join the battle with nearly twice the R&D investment of Tesla. However, the "ammunition" of the traditional giants is more than that. Before that, other traditional giants such as Volkswagen, Toyota, Ford, and General Motors have already made sufficient preparations.

Volkswagen plans to invest 89 billion euros in electric mobility and digitalization within 5 years; Toyota has prepared 4 trillion yen for pure electric vehicles including batteries; Ford plans to invest more than 50 billion globally from 2022 to 2026 $; GM will boost spending on electrification and smart driving to $35 billion by 2025.

Watching Tesla grow wildly, these giants can't sit still. The most important thing is that in front of them, in addition to Tesla, which has formed a certain scale and has a first-mover advantage in the electric vehicle market, there are also latecomers such as Weilai, Xiaopeng, and Ideal.

The traditional giants watched helplessly as "Tesla" eroded the market that once belonged to them. In 2021, a total of 6.5014 million new energy vehicles will be registered and sold globally, with a penetration rate of 10.2%. Among them, Tesla alone has a 14% market share.

Facing the arrival of the mighty electrification trend. Traditional car companies can no longer sit still and easily cede the hard-earned territory in the era of fuel vehicles to Teslas. The counterattack has already begun, and until then, they need a constant supply of "ammunition."

Traditional giants have invested a lot

In 2021, Tesla once again won the global sales championship with nearly one million deliveries, and its share of the pure electric market is as high as 20.3%. Against the background, the traditional giants look a bit bleak. Volkswagen, which started earlier, sold 452,900 pure electric vehicles in 2021, accounting for less than 10%. And GM, Ford, Toyota, Honda, etc. are almost negligible.

In the eyes of many industry insiders, Tesla's long-term and sustained high investment in research and development are inseparable from such excellent results. Musk also publicly stated in 2019: "Tesla's R&D expenditure in the past 10 years is about 20 billion US dollars, which is an investment that traditional giants do not have." Counting the R&D expenses in 2020 and 2021, Tesla's Total R&D spending over the past 12 years is around $25 billion. 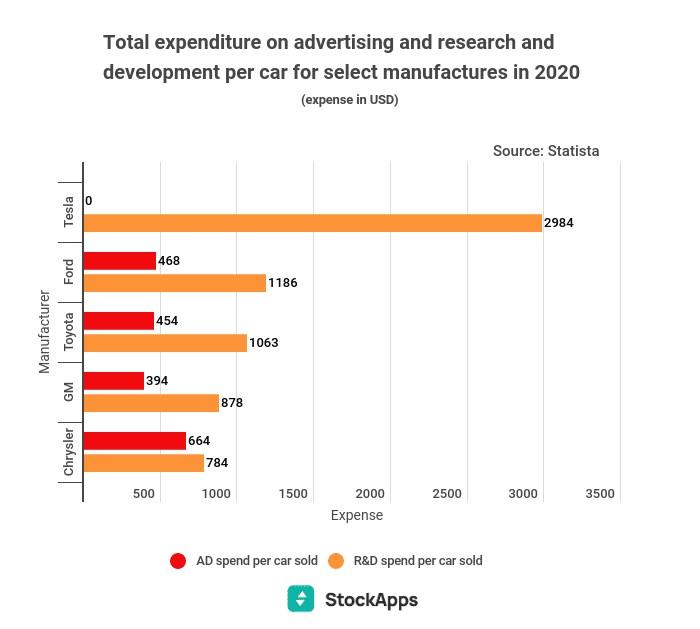 Recently, a report released by the stock trading information website StockApps.com showed that after comparing the R&D and advertising spending per vehicle of all major automakers, it finally concluded that Tesla spent $2,984 on R&D per vehicle. , is three times the industry average (about $1,000) and even higher than the combined value of Ford, GM, and Chrysler.

"However, there are two problems hidden behind this conclusion. First, the conclusion is only based on the data for 2020. Second, the R&D investment of other large automakers at that time was mainly in fuel vehicles, and the technology maturity was higher than that of electric vehicles. The higher the car, the lower the cost. Coupled with the distribution of the sales volume, the R&D expenditure on a single car will naturally be much lower.” Zhang Lin (pseudonym), an auto analyst, said.

Looking back at the "ammunition" prepared by traditional giants such as Volkswagen, Honda, and Toyota, it can be seen that it has far exceeded Tesla's R&D investment in the past 12 years. Moreover, they have invested a lot before this.

After the "dieselgate" incident in 2015, Volkswagen began to focus on the field of electrification, and in the same year, it quickly proposed to invest 7 billion euros to develop the MEB modular pure electric platform. Today, despite the big gap with Tesla, the Volkswagen MEB platform has blossomed and the ID. series models have stabilized at the level of over 10,000 sales per month.

In addition, Honda's smart and efficient pure electric architecture "e: N Architecture" and the full-stack intelligent control ecosystem "e: N OS" will also be launched this year. The low-key Toyota also invested a lot of money to develop the e-TNGA modular platform in the early stage. The Ultrium platform that GM has released is the integration of GM's 26 years of electrification experience.

How large these upfront investments are, we don't have valid statistics right now. But predictably, this should also be a lot of money. Taking the 7 billion euros invested by Volkswagen MEB as an example, this is already equivalent to three times the research and development expenses of Tesla in 2021.

These traditional giants are not stingy in electrification. The difference is that Tesla entered the game earlier.

So since traditional car companies also have steering and preparations, why have they opened such a big gap with Tesla?

How is the gap opened?

The reality is in front of the traditional giants. Tesla has created a capital "myth" with a market value of trillions with a $25 billion R&D investment. Volkswagen Group CEO Herbert Diess even praised Tesla CEO Elon Musk and the company he leads many times, "Tesla is a pioneer..." Even Toyota President Akio Toyoda, who rarely speaks out Can't help but comment.

So the question is, what can Tesla rely on to achieve a market size of nearly one million vehicles in the past 10 years with a research and development cost of 25 billion US dollars?

"The competition in the early electric vehicle market was not very fierce, and it was basically in a 'blue ocean'. Tesla started earlier and the industry threshold is relatively low. Although the R&D cost is low, it can efficiently convert R&D investment into technology, and then in the concept of It's easy to sell the car out of the box.

Musk himself described himself as a "kind of crazy engineer." This also led Tesla to want to put all its money into research and development. Tesla is known to not spend any money on advertising. Under his leadership, Tesla has developed many disruptive technologies and products, such as the Optimus humanoid robot and the DOJO machine learning training system, in addition to the three-electric technology and autonomous driving.

"Tesla's investment in R&D is still quite efficient when it is converted into technology. But the efficiency of converting technology into product advantages can be further improved," said a senior person specializing in electric vehicle research. "Traditional car companies are unable to achieve this kind of efficiency at present. On the one hand, it may be the reason for the internal operation of the company, and on the other hand, fuel vehicles will need to disperse part of their energy in the short term." 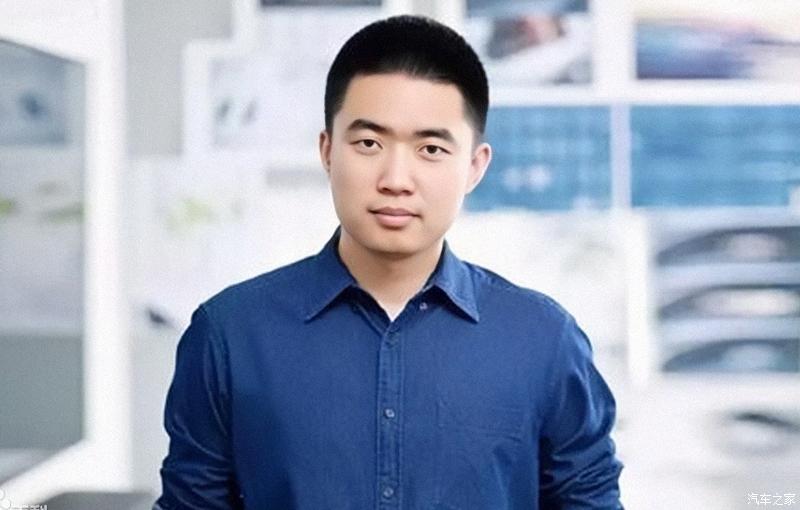 Li Xiang, the founder of Ideal Auto, once discussed this, claiming that "it is almost a perverted cost and efficiency requirement for himself." In his opinion, every money must be calculated carefully, and he must know how to attack, but also choose to give up. Put your money where your mouth is.

The financing ability of the new power brands is relatively strong, and they spend the money of investors, so the gambling is stronger. But traditional car factories are different. They spend their own money and pursue stability.

How much does it cost to catch up with Tesla?

In 2020, Thomas Ulbrich, a board member in charge of Volkswagen's electric vehicle business, said that Tesla, the U.S. electric car maker, is a full 10 years ahead of its competitors in building electric cars and developing software.

However, for this 10-year gap, how can traditional giants catch up? Volkswagen's 89 billion euros, Toyota's 4 trillion yen, or Honda's 5 trillion yen. I believe no one can give a concrete answer. But to be sure, they will cost a lot more than the Teslas of yesteryear.

The change in the direction of electrification means that these traditional car companies will need a lot of R&D investment to start from scratch, and it will not be lower than the original traditional car. Tesla’s precedent is set here. To achieve the same level as Tesla, the investment must be higher than Tesla. In addition, smart electric vehicles are still in the stage of development, new things need to be continuously released, and the investment will increase in the future. "

The sooner you do it, the less you spend. The more latecomers, the higher the price, this is a certainty.

Tesla has now reached this scale and has invested about $25 billion in real money in research and development. If this data is used as a reference, if traditional car companies want to successfully achieve the sales target of 2 million vehicles or more in 2030, they need two or more US$25 billion.

Musk, who is not astonishing, has previously said that Tesla aims to produce as many as 20 million electric vehicles a year by 2030. China's BYD also took the lead in announcing that it would stop selling fuel vehicles earlier this month, focusing all its energy on the electrification sector. In the era of "separation of the princes", it is not as easy as before to splash the real money and silver that has been smashed.

Indeed, the starting line of traditional giants is not on the same line as Tesla. Tesla can be said to have grown up in the pioneering enlightenment stage of electric vehicles, and the traditional giants will face the "mess" stage after enlightenment in the future. Objectively speaking, in this case, the R&D investment will only be more than expected.

Moreover, consumers who have experienced the enlightenment stage of electric vehicles are becoming more and more mature in their knowledge of electric vehicles, and their requirements for products will be higher, which will force traditional car companies to further increase investment in research and development. Improve the technology conversion rate and product conversion rate, and finally achieve a high conversion rate in the market, said a marketing person in charge of a well-known domestic car company.

For the traditional giants, there may be only one way in front of them, and that is to use a lot of money to smash the world and exchange space for time.