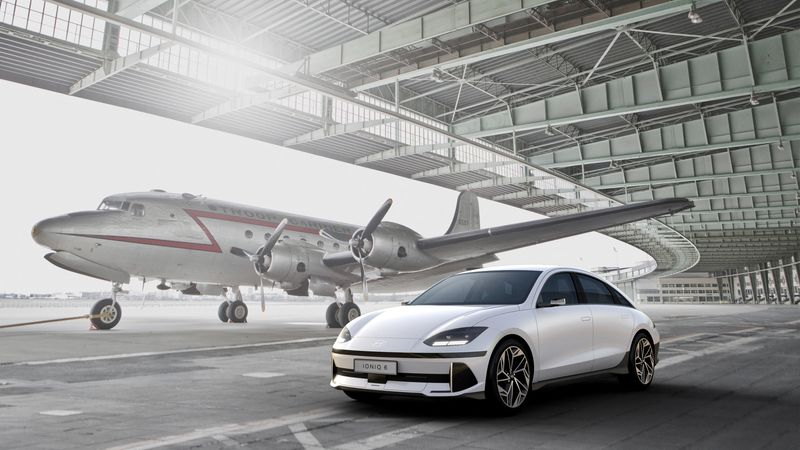 Hyundai Motor Co on Thursday launched its first electric sedan, the Ioniq 6, which the South Korean automaker hopes will help it take a bigger share of the electric vehicle (EV) market dominated by Tesla Inc.

The Ioniq 6 is one of 31 electric models that Hyundai Motor Group - which includes Hyundai Motor, sister company Kia Corp and premium brand Genesis - plans to launch by 2030 to secure a 12% share. of the global EV market.

Hyundai's sedan will expand its EV lineup beyond its current crossovers and SUVs to compete with Tesla in a popular category.

Excluding China, the world's biggest car market, Hyundai and Kia together accounted for 13.5% of EVs shipped globally between January and May this year, according to industry tracker SNE Research. That figure is second only to Tesla, which held a 22% share during the same period.

"We use the same (battery) cell chemistry but...we have maximized the number of batteries per pack, which significantly improves energy density," said Kim Yong Wha, executive vice president of Hyundai.

The automaker has not disclosed the price of the Ioniq 6.

It will be offered in two battery pack options - 53 kilowatts per hour (kWh) and 77.4 kWh - and will begin production at its Asan plant in South Korea later this year, Hyundai said.

The market launch schedule will be announced later.

Hyundai typically sources batteries from LG Energy Solution Ltd and SK On from SK Innovation. Kia recently adopted Chinese CATL batteries for its cars sold in South Korea, but the automaker did not reveal the source for the Ioniq 6 cars.

The launch comes after Hyundai announced plans to build dedicated EV factories both at home and in the United States, where the Ioniq 5 and Kia's EV 6 SUV together became the best-selling EVs after the Tesla cars and in front of Ford Motor Co.'s Mustang Mach-E.

"Both vehicles address two major flaws that previous EV vehicles had in the US market: lack of style and range," said Ivan Drury, senior director of insights at Edmunds, of the Ioniq 5 and the EV 6.