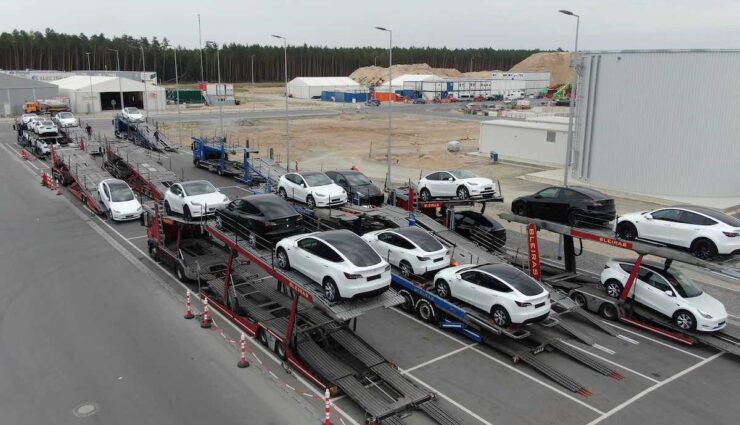 After the drone observer, Tobias Lindh had mainly filmed masses of large castings on the site of the German Gigafactory in Grünheide near Berlin at the beginning of last week instead of the new Model Y, there was some speculation as to whether the Tesla factory would take a break again after the renovation interruption in July inserted. After a new overflight on Saturday, Lindh was able to report "Model Ys everywhere" on the site again. As usual since the start, they are all painted in black or white. But currently, there were many Model Y in the Long Range (LR) variant, which was previously mainly produced in China for Europe.

Appropriately, buyers reported in the Tesla Drivers and Friends (TFF) forum that the delivery window for their Model Y Long Range from Germany has narrowed to the next few weeks. A reader sent teslamag.de an invoice from Saturday, which stated today's Monday as the delivery date, and according to the reports, that wasn't the only one. After the first Model Y LR was surprisingly delivered to fleet customers in particular before the two-week conversion in July, this variant is now being produced regularly alongside the performance version.

Recently, it was learned that the LR launch from the German Tesla factory started earlier than planned due to problems with the rear performance unit. Without confirming the reasons for this, another source informed on Monday that many Model Y LRs would also be built in Grünheide at the beginning of the new week. At least one van with it, among other things, has already arrived at the Tesla Center in Holzwickede near Dortmund, as reported by the @ModelYOwnersDACH club on Twitter.

Expect more Model Y LR deliveries from the local factory this week. Tesla seems to be producing this version in the German Gigafactory for the time being only with white paint, black interior, and 19-inch wheels, i.e. without extras. This has the advantage that it stays just under the 60,000 euro purchase price - for company car customers this means that they only have to pay tax on 0.25 percent of it per month as a monetary advantage of private use instead of 0.50 percent as with more expensive electric cars.

As was further heard on Monday, production in the German Tesla Gigafactory was recently a good 1000 Model Y per week. This value, which was first reached in June, was maintained or reached again, but so far has not been increased significantly, although that was one of the goals of the interruption in July. Before this two-week break, the Giga presses in the Tesla factory are said to have produced up to 60 percent rejects, which were then reduced to 10 percent. The many cast parts on the Gigafactory site are not scrapped but have been produced for stock, it is now said. At least the huge die-casting machines don't seem to be slowing down the ramp-up at Tesla in Grünheide for the time being.