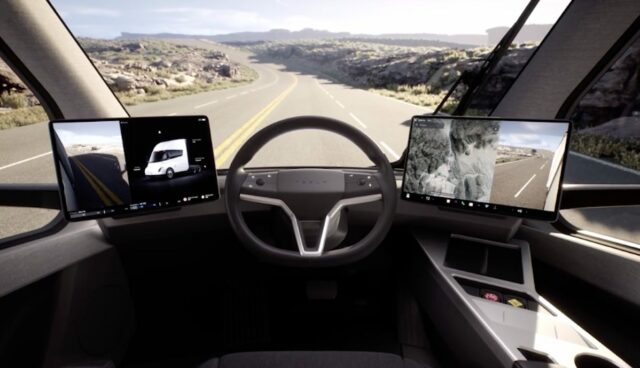 The Tesla Semi is moving. At the beginning of the month, CEO Elon Musk surprisingly announced that deliveries of the electric semi-trailer truck, which was presented in 2017 and last announced for 2023, would begin this year - even in the larger version with a range of 500 miles. Tesla has now also redesigned the website for the Semi, including videos from the cockpit and while charging. As part of this change, however, the possibility of pre-ordering a semi also disappeared in the USA, and prices are no longer visible.

Tesla Semi with 3 instead of 4 motors

In this respect, Tesla is sending mixed signals after Musk's announcement but is apparently taking more care of its semi, which should initially be produced from the end of 2019. Prices have remained the same since the 2017 launch: $180,000 for the 500-mile range version (800 km) and $150,000 for the 300-mile range. But now they don't seem to apply anymore, because there's nothing left of them on the redesigned page. Recently, Tesla boss Musk said about the Cybertruck, which was also overdue, that its prices and other specifications would change at the start.

There have also been technical changes to the Semi, according to the updated US site. So before there was talk of four engines, now there should only be three. According to Tesla, however, this is still enough for acceleration to 60 miles per hour within 20 seconds with a full load – extremely fast for a truck. As before, the company quotes less than 2-kilowatt hours per mile as consumption and a range of 500 miles. The Cd value was previously specified as 0.36, now there is no longer a number. At the end of 2021, a YouTuber used this information to calculate that the Tesla Semi would need almost 1-megawatt hour of battery capacity for a range of 500 miles.

No more prices for electric semi-trailers

How it is recharged can now be seen on the Tesla website in a short video filmed on the mega chargers that were set up at the Gigafactory in Nevada last year. Lately, they seem to be called Semi Chargers. Another short video shows the view from the cockpit of the electric articulated lorry (see photo above). The driver's seat is still in the middle, and large screens are mounted to the left and right of the wheel. So the Tesla Semi continues to offer interesting data and solutions - only that you can no longer pre-order it in the USA and you don't know what it will cost. In most European countries, Tesla completely removed the Semi from its website this May.

Tesla Factory In China Is Revving Up: 10,000 Model 3 And Model Y Ready For Ship Transport