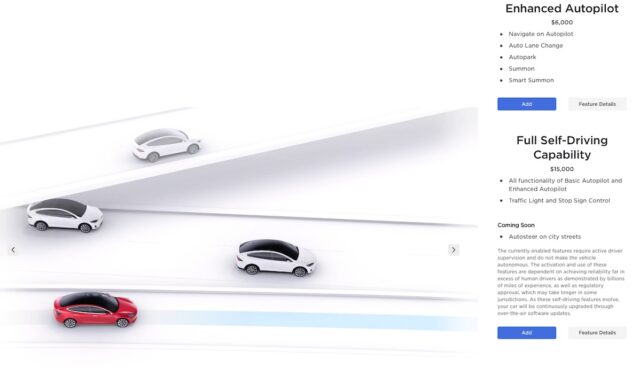 He does not realize everything that Tesla CEO Elon Musk publicly plans to do within the time allotted for it - autonomous driving in particular has been overdue for years, based on previous statements by him. But Tesla has now implemented a Musk announcement just in time, which is at least related to it: In the USA, the Full Self-Driving (FSD) option has cost $15,000 since this week (see configurator screenshot above) and is, therefore, $3,000 more than that before.

In October 2020, Tesla started a beta test with software also called FSD with selected US customers. Back then, the price of the eponymous autopilot option rose by $2,000 to $10,000 after CEO Musk said in August 2019 that it would do so every two to four months in tandem with advances with FSD. Ultimately, the increases were a long time coming, as were new versions of the software and the expansion of the beta test. But now, as announced by Musk two weeks ago, Tesla has increased the price again by $3,000.

However, only part of his announcement has been implemented on time: together with this, the Tesla boss wrote on Twitter at the end of August that FSD Beta 10.69.2 would be widely distributed at that time, i.e. probably to all of the currently around 100,000 testers in North America. Instead, an update to version 10.69.1.1 came at the weekend, but apparently only for a very limited group of people. Apparently, Tesla was not deterred by the price increase for FSD.

The new update postponements suggest that Tesla will also struggle to achieve CEO Musk's latest autonomy goal: Last December, Musk said it was "quite likely" to drive independently at Level 4 this year to get a grip, so without human supervision in limited areas. At the Tesla AGM in August, he reiterated that, but then started laughing himself.

At the end of the month in Norway, Musk also sounded more cautious: His two main goals for 2022 are to get the SpaceX system Starship into orbit and "to have self-driving in wide release at least in the US," he said at one energy conference. For the rest of the year, he apparently only intends to train the FSD software out of the "beta" so that it can go to all US customers who have paid for the option of the same name. But that wouldn't be autonomous driving even if it worked almost perfectly, because the Tesla autopilot is still legally a pure assistance system, even with FSD, in which the person at the wheel is not relieved of responsibility.

The most popular electric car in the world, the Tesla Model Y