English
Home
/
NEWS
/
Records In The Second Half Of The Year: Tesla Boss Musk Sees Production Increasing To 40,000 Cars Per Week

Records In The Second Half Of The Year: Tesla Boss Musk Sees Production Increasing To 40,000 Cars Per Week 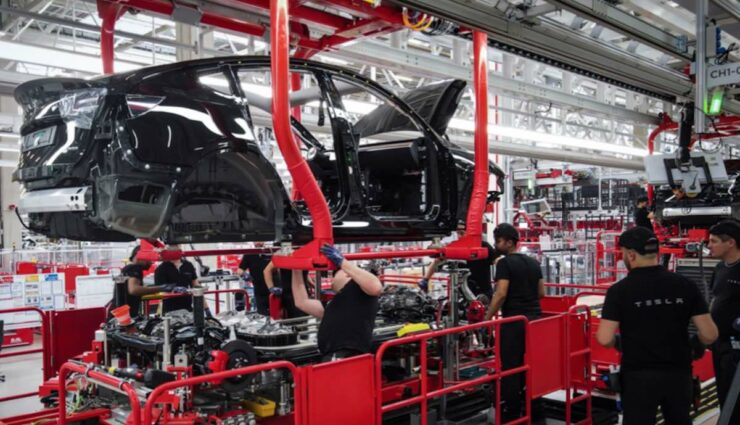 In the second quarter, Tesla struggled with various difficulties in production, but the course is set for high growth in the rest of the year. Tesla's profit in the quarter was already significantly higher than analysts had expected, according to the business figures published on Wednesday evening. In the subsequent web conference, Tesla management then looked to the near future - and CEO Elon Musk spoke of a good chance of achieving a production rate of 40,000 electric cars per week by the end of this year.

After the Gigafactory in China had to remain closed for weeks from the end of March, Tesla has been making modifications to it since the beginning of this month, which should lead to an increase in production to more than 1 million Model 3 and Model Y per year. This is taken into account for the first time in the current quarterly report: The capacity of the factory is given as ">750,000" - probably still low, but significantly more than the previous ">450,000". For Fremont, Tesla also states an annual capacity increased by 50,000 to 550,000 Model 3 and Model Y plus a further 100,000 Model S and Model X, for the new gigafactories in Germany and the USA the first value is “>250,000”.

This results in an installed capacity of 1.9 million electric cars per year, and by the end of 2022, CEO Musk not only wants to use it but even exceed it, as he revealed at the conference. "I think we have a good chance of ending this year at 40,000 vehicles a week," he replied to an analyst who asked when the 1.9 million hit. According to Musk, there would even be more than 2 million without interruptions. Tesla has recently had several weeks with 30,000 cars produced, so 40,000 are within reach by the end of the year, the CEO explained.

His technology SVP Drew Baglino at least supported the statement on the exhaustion of the newly specified factory capacities by the end of the year. That is the internal plan, even if it takes time and is a challenge. The factories in Shanghai and Fremont had already set new records in June, and the German Gigafactory was also showing increasing strength. Tesla had previously reported the first production of more than 1000 Model Y in one week. Texas is expected to reach that milestone in the next few months, Musk added on Wednesday. The Model Y was initially produced there with its own 4680 batteries. According to the CEO, 2170 batteries are currently being used, as in China and Germany, but there is no shortage of them this year.

In order for the new gigafactories in Germany and Texas to reach the annual capacity of 250,000 Model Y, they would have to produce almost 5,000 of them per week. The Tesla boss said at the conference that he was confident that this would be possible by the end of this year or early next year. By the end of 2023, both should then “probably, but not definitely” come to 10,000 electric cars per week. At 500,000 per year, this would correspond to the capacity specified in the applications for the current phase of both factories. Together with the information for the other locations in the Q2 annual report alone, this would result in a Tesla annual capacity of 2.4 million electric cars. As mentioned, the value for China is already an understatement, and according to reports, Tesla is even planning another factory there.