English
Home
/
NEWS
/
Tesla Drivers Are Looking For Extremes: This Is Where Combustion Engines Fail

Tesla Drivers Are Looking For Extremes: This Is Where Combustion Engines Fail 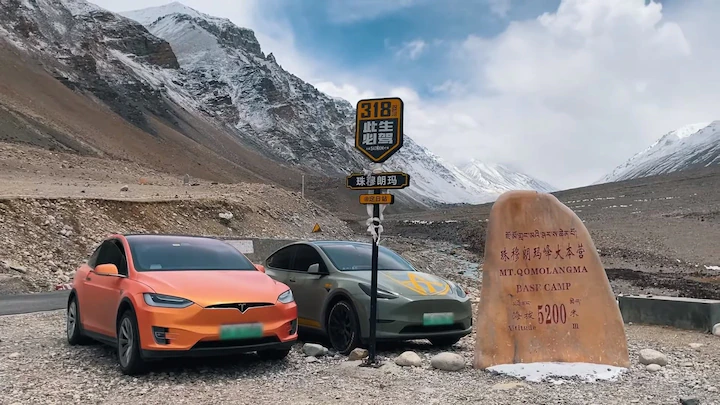 The Chinese vlogger Trensen Chongqing took on a very special challenge with his Tesla Model Y. Together with a friend, Chongqing ventured on a road trip to one of the most remote places in the world - the base camp of Mount Everest.

In order to demonstrate the possibilities of electric cars, the Chinese vlogger Chongqing decided to take on a very special challenge with his Tesla Model Y. From the Chinese city of Chengdu, he and a friend set out on a 2,400 km road trip to Mount Everest (also called Mount Qomolangma in Chinese). Normal vehicles with internal combustion engines have not yet been able to reach the base camp of Mount Everest.

A road trip to Mount Everest

When the vlogger told friends about his idea, most thought he was crazy. With an electric car on Mount Everest? Impossible! But Chongqing proved the opposite. Before the trip, he adapted his Model Y and his friend's Tesla Model X to the harsh climate and high-altitude conditions of Mount Everest. The closer the two friends got to Mount Everest, the less traffic they encountered - after all, the terrain became more and more difficult. After five days they reached their destination: the North Base Camp of Mount Everest.

The Tesla Supercharger Network made the two friends' road trips possible. In total, the network already has more than 8,700 superchargers in China. To the benefit of the two, many of these Superchargers are also located in more remote locations. The two drivers made nine stops along the entire route to load the vehicles. The range per charge was therefore around 260 km. The Teslas reached their destination at an altitude of 5,200 meters and the Tesla Model Y and Model X had no problems there either.

Proud result for the two Teslas

Chongqing and his friend were able to prove that electric cars can not only cover long distances but also reach places previously unreachable for vehicles with internal combustion engines. On the way, the two drivers with their Teslas faced new challenges again and again. In addition to geological problems such as landslides, the search for a hotel also posed an unexpected challenge on some nights. In these situations, however, the Tesla Model Y and Tesla Model X proved their talent as all-rounders. In camp mode, the vehicles were used by the drivers as a place to stay overnight, because the integrated mode can be used to set a specific temperature for the interior of the vehicle overnight, for example.

For a long time, electric cars were considered unaffordable luxury toys or unsuitable, tiny eco-companions. But at least since the success of Tesla's mid-range electric car Model 3, it has been clear that everyday electric cars with good long-distance ranges do not have to be much more expensive than comparable mid-range combustion engines such as the BMW 3 Series. There is now a lot of competition in the electric mid-range. has tested and compared all relevant mid-range electric cars.

How BYD Is Pulling Tesla Away