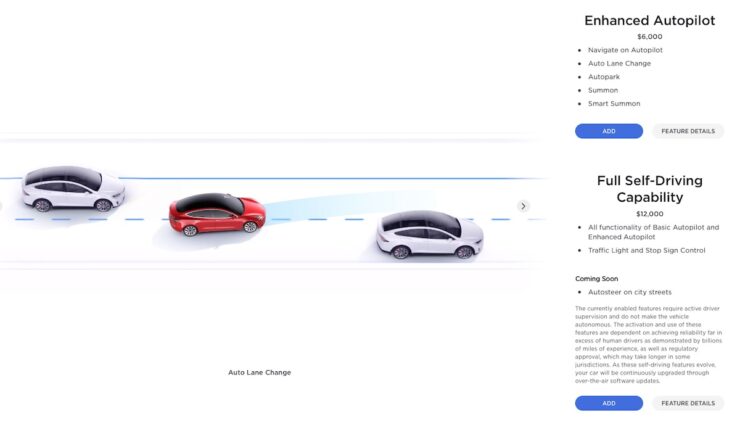 Some things at Tesla still happen very quickly. With a brief "Ok" in mid-June, CEO Elon Musk granted a Twitter follower's request to reintroduce the EAP autopilot option in all countries. The alternative to the complete FSD package previously existed with a different scope, then disappeared and later returned, initially in Europe. Shortly before the worldwide Musk-Ok, the Enhanced Autopilot appeared in the configurator in Australia and New Zealand. And now it's back in the US - as expected, at a much higher price.

According to the Tesla configurator, you pay $6,000 for the Enhanced Autopilot option, which costs €3,800 in Europe. It includes the functions of navigating on autopilot (NoA), automatic lane change, automatic parking, and intelligent summoning. The price difference is perhaps justified insofar as EAP is allowed less in Europe than in the USA; For example, Tesla currently has to limit the NoA function via a software update. The upgrade to FSD costs the same in each case, i.e. bought immediately, about twice as much as EAP (see configurator image above).

The full FSD package (short for Full Self-Driving Capability) initially only includes the automatic stopping at red lights and stop signs function. In addition, there is a kind of option value in the form of the assurance in the configurator that "in the near future" Autosteer on City Street or in German the City Steering Assistant will be possible. In the USA it is already much closer, as a beta test is running there with the completely new autopilot software, also known as FSD. It can also steer itself in cities. However, it is not easy to be included in this test. According to Musk, Tesla recently increased the number of beta participants to 100,000.

According to the CEO, it should be one million before the end of this year, which sounds ambitious because, according to one observer, fewer and fewer Tesla customers are opting for the FSD option. Globally, it's said to have dropped to just 7.1 percent in the first quarter (but that doesn't include the ability to post-activate the extra or, in the US, subscribe). According to this evaluation, the FSD rate at Tesla reached its highest level of over 50 percent in mid-2019 but has been falling quite steeply and steadily since then.

In Europe, this development was more pronounced than in the USA, where around 15 percent of new Teslas were still ordered with FSD. Maybe that's why Tesla brought back the EAP alternative to the full package including future options here earlier. The fact that the company is nearing the end of a financially difficult quarter could have played a role in the current reintroduction in North America - the otherwise increasingly productive Gigafactory in China was only able to build very limited Model 3 and Model Y due to corona lockdowns, and the According to Tesla boss Musk, new ones in Germany and the USA caused billions in losses at the end of May.

Candidate With Tesla Blasphemes: Million-dollar Campaign Against Fsd Has Brought Nothing To The Competitor