Tesla should plan battery production and conversions in Fremont 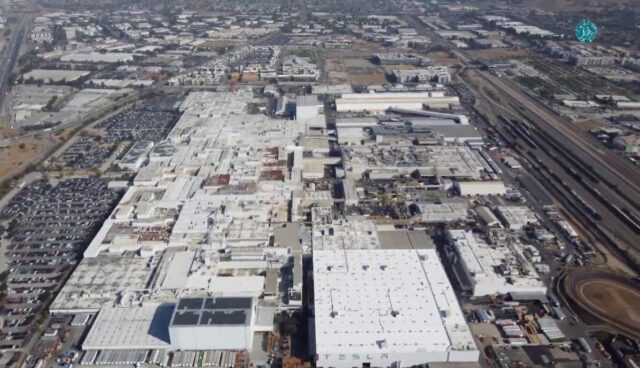 The main plant in Fremont (see photo) has been bursting at the seams for years, but that hasn't stopped Tesla from trying to increase production there as well. Both there and in the Gigafactory in China, capacity is to be increased by 50 percent, CEO Elon Musk announced this January. In China, Tesla should have already achieved this goal with modifications in July and August. According to a report, the company has also announced extensive changes for Fremont. Even their own battery production seems to be planned there.

Tesla applications from the Fremont city administration. According to the documents, a production line for batteries is planned on the second floor of the main building. However, it should be a comparatively small project, because the costs are given at 1.5 million dollars. In addition, the approval should relate to the module part of the production, i.e. not necessarily to batteries manufactured on site.

But that would also be an expansion of activities in Fremont, because as far as is known, Tesla has been using ready-made battery packs there, which are delivered from the Gigafactory with Panasonic in Nevada and probably more recently with LFP batteries from China. And that's not all. According to Teslarati, Tesla has also registered a $1.3 million project for new offices, warehouses, and production cells in the main building. A YouTuber recently reported demolition work right next to the Tesla site, which speaks for an expansion.

The Fremont plant, acquired cheaply from a joint venture between Toyota and GM, was already the busiest auto producer in North America last year. According to one analyst, previous owners there never produced more than 300,000 units a year, and Tesla is already making around 450,000 in 2021. In the latest quarterly report, Fremont's capacity is even given as 550,000 Model 3 and Model Y and 100,000 Model S and Model X. As Teslarati continues to write, Tesla seems to have recently implemented systems for the two premium electric cars - possibly to make room for battery production or more Model 3 and Model Y.