English
Home
/
NEWS
/
Will the Tesla Model S and X Plaid become the favorite luxury cars of the French?

Will the Tesla Model S and X Plaid become the favorite luxury cars of the French? 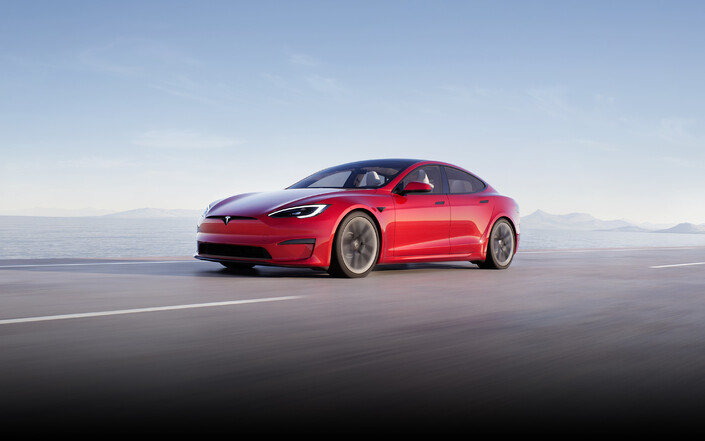 The two new ultra-powerful top-of-the-range from Tesla are finally arriving on the French market. Will they turn customers away from Porsche or Mercedes?

Since the beginning of August, Tesla is finally allowing French customers (and the rest of Europe) to order the restyled versions of its big Model S and Model X. If a less elitist variant will join the catalog next year, Tesla's two large family cars currently only exist in the "Plaid" version with three electric motors, developing some 1020 horsepower according to the American manufacturer. A new powertrain that makes these super-powerful Teslas real catapults. The performance figures are not yet officially homologated, but the Model S Plaid would shoot the 0 to 100 km / h in 2.1 seconds and the 400 meters from a standing start in 9.23 seconds. For comparison, a Bugatti Chiron Super Sport of 1600 horses requires 2.4 seconds to bring down the 0 to 100 km/h!

With its greater mass and less extreme vocation, the Model X Plaid SUV claims a 0 to 100 km / h in 2.6 seconds. A 619-horsepower electric BMW iX M60 takes 3.8 seconds to reach the same speed. All with a largely modernized interior in the Tesla after the -already- ten-year career of the Model S, with a new, more efficient digital interface and even the prospect of 100% autonomous driving possible by then. next year if Elon Musk finally keeps his promise. All this for €138,990 if you choose the Model S Plaid and €141,990 in the case of the Model X. With a maximum range WTLP estimated by Tesla at 600 and 528 kilometers respectively. Never had new Teslas cost so much.

Still, compared to the electric competitors currently on the market, these prices seem “reasonable” given the power and performance announced. Offered from €135,850, the Mercedes EQS 450+ limousine benefits from greater autonomy (725 km) thanks to its large 107.8 kWh batteries, but its performance has nothing to do with it. The EQS 53 AMG, with 658 horsepower and a range reduced to 561 kilometers, costs €169,850 and cannot compete in the field of performance (0 to 100 km/h in 3.8 seconds). Queen of very high-performance electric sedans, the Porsche Taycan Turbo S (0 to 100 km/h in 2.8 seconds) marks time in a straight line but catches up in the turns: it has just elsewhere to take over the chronometric record for electric cars on the Nordschleife with a time of 7 minutes and 33 seconds, beating that achieved last year by the...Tesla Model S Plaid. But it costs €193,061 in the Turbo S version without any options.

So, will these new supercar-powered Teslas be a hit on the French market? The first deliveries will begin between December 2022 and February 2023. We can't wait to see what these models are really worth, knowing that the current Model 3 and Model Y are already excellent cars. Remember also that other new competitors are on the horizon: the Lucid Air, for example, whose brand new version “ Sapphire ” precisely wants to beat the Model S Plaid. And we also wonder how inexperienced drivers will behave when they end up with machines with terrifying performances.