Six Cars In The Service Test: Tesla In Last Place Tesla is criticized in the test because almost all functions can only be operated via the screen. That distracts, says the ADAC.

The operation of cars is becoming more demanding due to the increasing number of functions. The ADAC has tested in which model the distraction is greatest.

A brief flashback to a VW Golf in the mid-1990s: Even with full equipment, the operation was immediately accessible even to newcomers. If you needed instructions here, you probably also needed them to open a refrigerator. These times are over almost everywhere, and we as customers, among others, have contributed to this. Ultimately, the manufacturers who were able to offer – and sell – as many new functions as possible benefit.

The numerous features meant that the designers and engineers had to think about it. Because providing everything with its own button reached its limits as the number of functions increased. BMW tried it in 2001 with the first generation of the iDrive. A radical design that was defused just as quickly as it was copied by the competition. The ADAC looked at how intuitive six current cars are to operate.

The club's attempt initially makes sense. In six cars, it was checked how barrier-free certain functions can be reached. Safety-related things, such as the positioning of the hazard warning switch, had the highest priority at 50 percent. Air conditioning and infotainment played a subordinate role at 30 and 20 percent. However, the club leaves a few questions unanswered. How adept are the testers in dealing with vehicles they are not familiar with?

In addition, the majority of drivers rarely get into someone else's car - for example, if they rent a car. Most of the time, however, you sit in your own car, in which the paths to the most important functions will hopefully open up at some point.

There are significant differences between the functionality of a Dacia Duster and a Tesla Model 3 (test), and that was not taken into account either. The voice control was not tested, which at least explains the miserable result of some candidates. In the A-Class, for example, the touchpad was heavily criticized, but Mercedes opened up further operating options with excellent voice control and a reliably responsive touchscreen. Tesla is penalized for the hazard warning switch on the headliner. In general, the testers could not get used to the concept in the Model 3, whose functions are operated almost entirely on the huge screen.

Victory for the Mazda 3

In the VW Golf (test) it was criticized that the automatic climate control can be set awkwardly. I felt the same way in the test, but readers pointed out that they would rarely change anything there. The BMW 1 Series received the worst individual mark in the test for the operation of its infotainment system. The Model 3 scored best here with a score of 1.0. 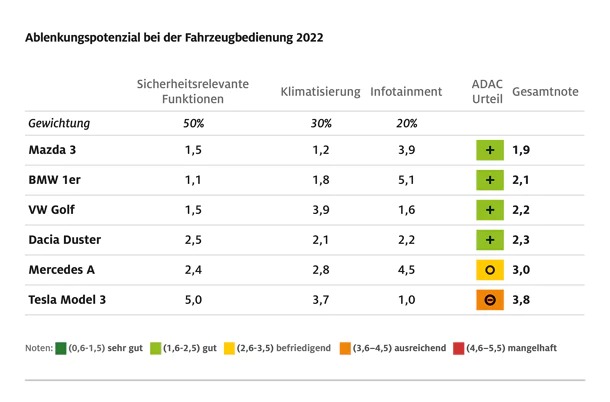 In this test, the BMW 1 Series received the worst individual mark for the operation of the infotainment system.

The Mazda 3 and BMW 1 Series took the top two places overall with good to very good marks for the operation of safety-related things and simple adjustment of the air conditioning. At least in the BMW 1 Series, that should be history within a year, because then the successor to the infotainment system OS7 will also move in here. With the OS8, the direct control elements for the ventilation disappear, but above all the largely freely assignable favorites buttons. Things such as navigation destinations, telephone numbers, radio stations, or even certain functions can be easily stored here in the 1 Series. This is also available in OS8 but shifted to a sub-function of the main screen. Better than nothing, but not as simple as the previous row of keys.

We agree with the ADAC's demand that certain functions should be intuitively accessible. As someone who has to get involved with a different car about every two weeks, I have to say that a lot has developed in the right direction in the field of voice control in recent years. If you don't want to get used to it at all, you will find it difficult to find exactly what you need from the abundance of functions in many models. Perhaps one thing will comfort him: Even if the simple approach of a Golf 3 will never return - nowhere are current operating systems as cerebral as the first iDrive.

Many manufacturers are visibly trying to make access easier for newcomers. With varying degrees of success. In the USA, a university and a non-profit organization specializing in safety issues have even started a campaign: "My car does what?" The University of Iowa and the National Safety Council are trying to improve road safety by showing drivers what safety functions their cars are capable of and how they can be used in a meaningful way.

The campaign is financed, involuntarily, by 30 million US dollars from Toyota. They are part of the $1.1 billion that Toyota paid to settle a California class action lawsuit following mass recalls over unwanted vehicle acceleration.

The Lifespan Of Electric Cars: The Owner Of A Tesla Model X Unwinds More Than 320,000 Kilometers