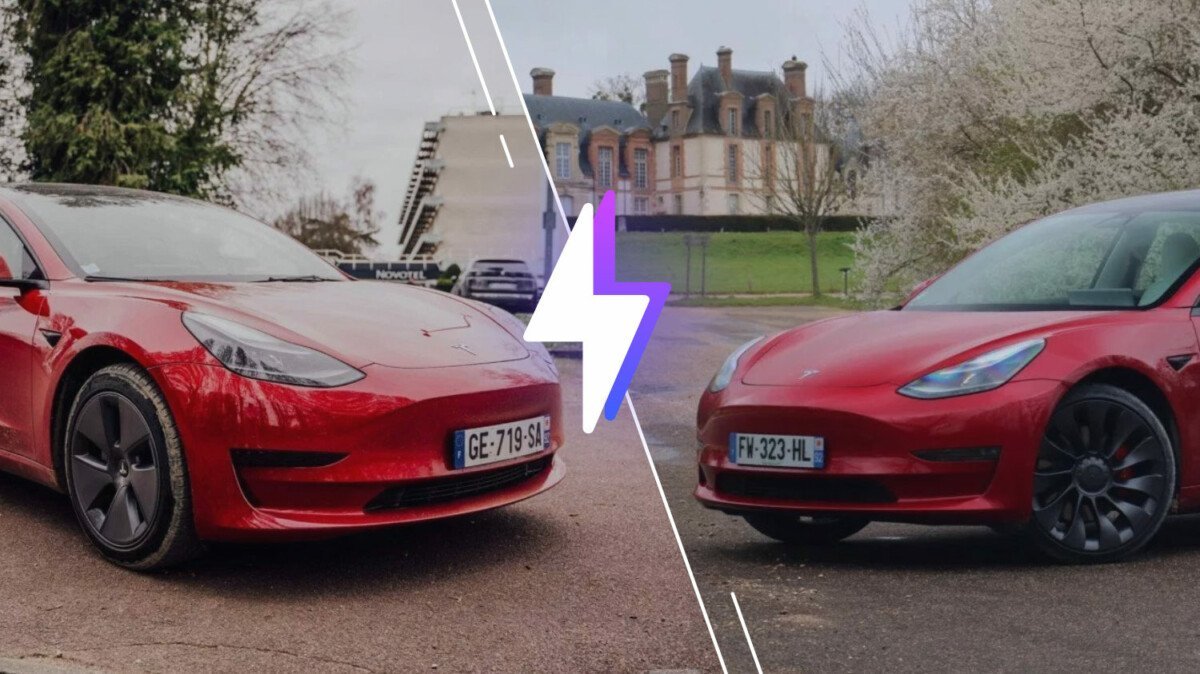 For once, we have decided to compare two electric cars to help you define the one that suits you best. Finally, this time, it's the Tesla Model 3 which confronts itself, in two different versions: Propulsion against Performance.

The 2021 queen of electrics have been revised for 2022, both in terms of price and equipment. Certain elements of comfort have appeared (heated wipers in particular), and on the entry-level, prices have soared to titillate 50,000 euros.

If the interior and exterior design are almost similar, the performance, autonomy, and of course the price is not really. Let's take a look at the similarities and differences between these two Tesla Model 3 versions together.

An untrained eye would have a hard time distinguishing a Tesla Model 3 Performance from a Tesla Model 3 Propulsion. The dimensions are exactly the same on both variants, with 4.69 meters long by 1.85 meters wide and 1.44 meters high. The full grille at the front, ending the long plunging hood, is the same on both versions of the American sedan, and you have to approach the rear trunk to notice the first difference: there is no acronym "  dual motor  " underlined on the propulsion version, nor a carbon spoiler at the top of the trunk. Another difference, the chassis lowered by one centimeter (ground clearance of 13 centimeters) on the Tesla Model 3 Performance will underline the sportier side of the racing car. But the most visible point from the outside will undoubtedly be the 20-inch wheels in turbine format which are exclusive to the Performance and cover the red brake calipers, just to support the aggressive side once again. On paper, we will also note an invisible feature from the outside: the weight. If the Model 3 Propulsion displays 1,752 kilograms on the scale, the Performance version will be heavier by 84 kilos (1,836 kilograms), the fault of a larger battery.

By opening the door of the Tesla Model 3 Propulsion, you will find an interior in all respects similar to that of a Tesla Model 3 Performance, with the sole exception of the brake and accelerator pedals. They are plastic on the Propulsion version, while they are aluminum on the Performance version. Apart from that, the minimalism pushed to the extreme by Tesla is very much the same, with a sleek dashboard, without any visible buttons or air vents, and a 15-inch screen in landscape format as the only means of interaction. with the embedded system.

The usable volume is similar between the two versions of the Tesla Model 3, with a small trunk of 88 Liters under the front bonnet, practical for storing some personal effects, and a rear trunk of 561 Liters which will allow you to travel with your family without too many problems. Be careful, however, not to fit objects that are too wide or too high: it is a trunk and not a tailgate. There are faux leather seats (black or white) and a large panoramic glass roof that will emphasize the feeling of space on board. Up front, the driver and passenger can take advantage of heated electric seats and the driver can save his profile so that his seat can be adjusted to his liking when he opens the door. After all, it's a tech-packed car.

EMBEDDED TECHNOLOGIES
A computer on wheels, that's how we can characterize the Tesla Model 3. Whether in the Propulsion version or the Performance version, both are equipped in the same way except for two details today: the LED fog lamps are absent from the Model 3 Propulsion and the audio system has two speakers. 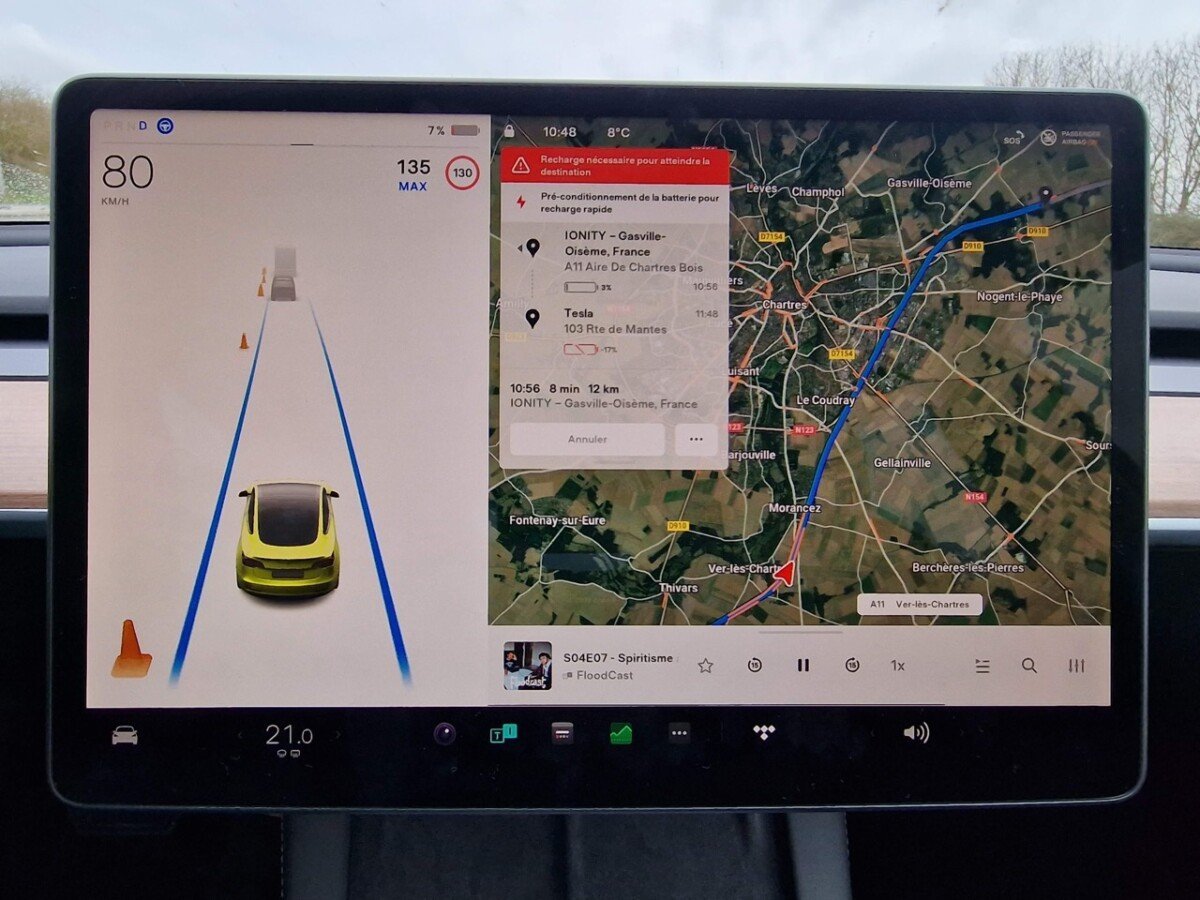 In addition to this, the same thing is found on board both vehicles, starting with a 15-inch central screen on which the entire infotainment system is controlled. If Android Auto or Apple CarPlay are not included, Tesla has still had a good idea to integrate several music streaming services ( Spotify and Tidal ) and, when the vehicle is stationary, it is possible to watch videos on YouTube or Netflix, handy for killing time during Supercharge sessions.

Now with an AMD Ryzen processor that shines with its fluidity, the central screen offers an excellent user experience. Tesla's Autopilot is also standard on both vehicles and features a combination of adaptive cruise control and active lane keeping, enabling Level Two autonomous driving. 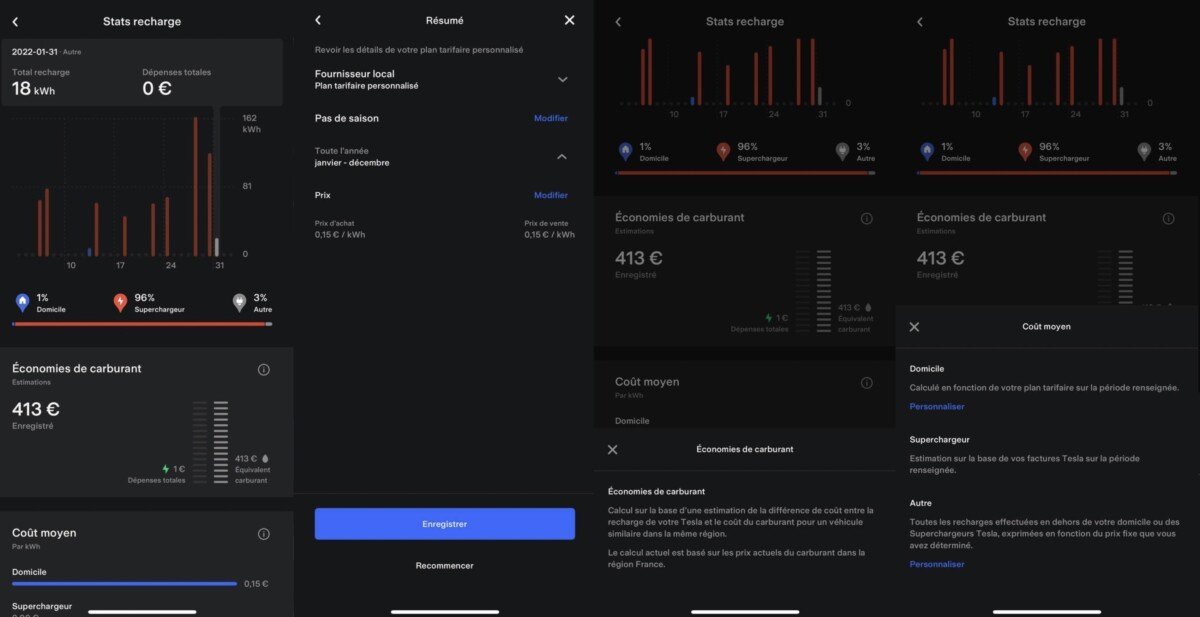 Finally, it should be noted that the Tesla mobile application offers many practical functions thanks to the car's cellular or Wi-Fi connection, from charging planning to cabin preconditioning, including viewing charging statistics. To learn more about the Tesla companion application, do not hesitate to read our summary file.

ON THE ROAD
If the two versions of the Tesla Model 3 were very close until now, it is on the road that the first differences will be suddenly felt. Pedaling in either car won't have the same impact at all: in rear-wheel drive, it'll take you 6.1 seconds to hit 100 km/h, when that'll be over in 3.3 seconds with Performance. 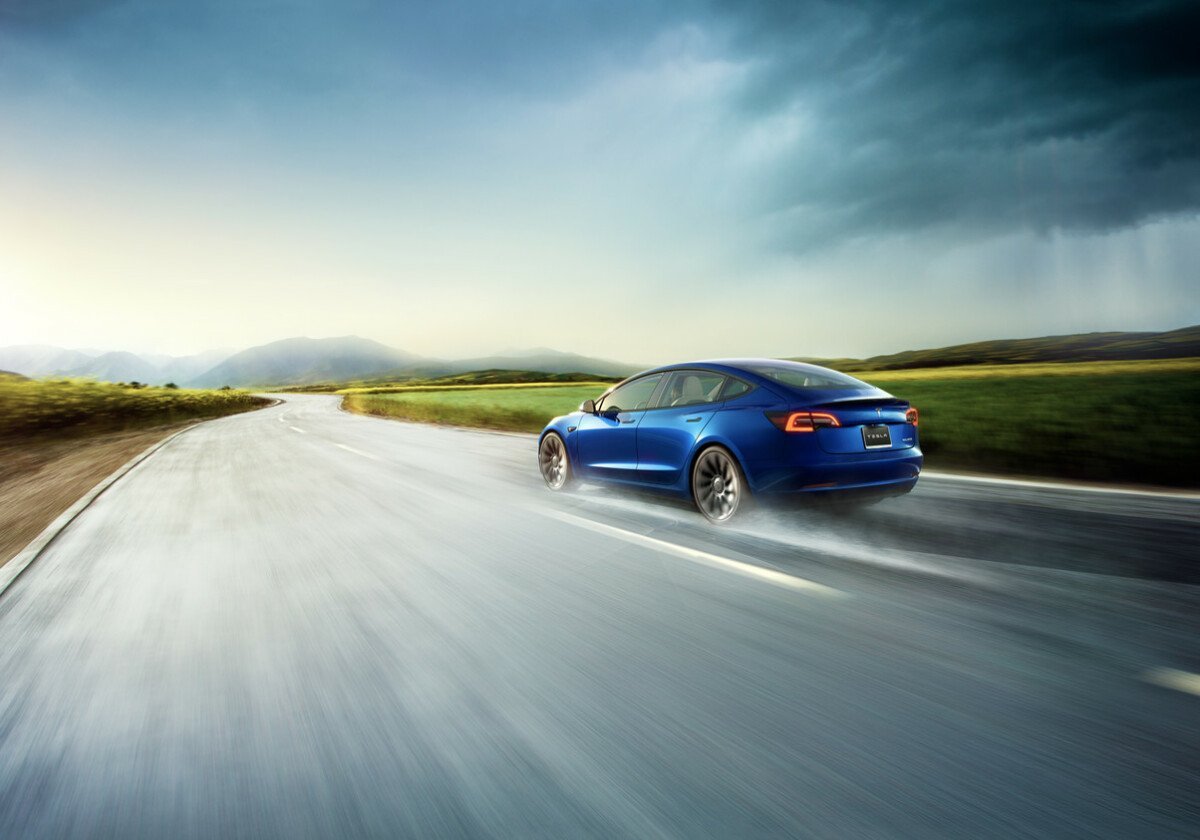 The all-wheel drive of the Performance model will ensure impeccable handling, which will be difficult to fault. On wet pavement, the Propulsion version will show its limits more quickly, the fault of traction present only on the rear axle. Likewise, if you live in an area frequently subject to snowfall and ice, the Performance version will probably be more suitable. 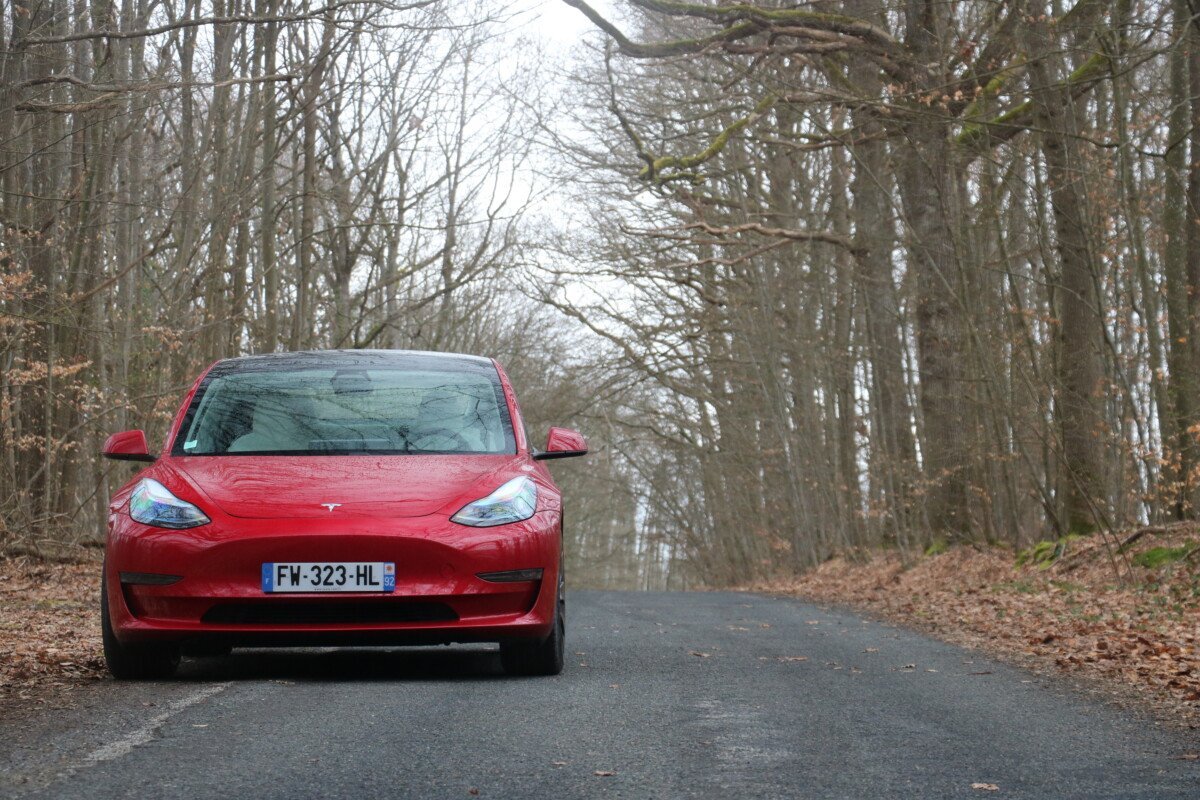 The Tesla Model 3 Performance has some head-turning technical features: 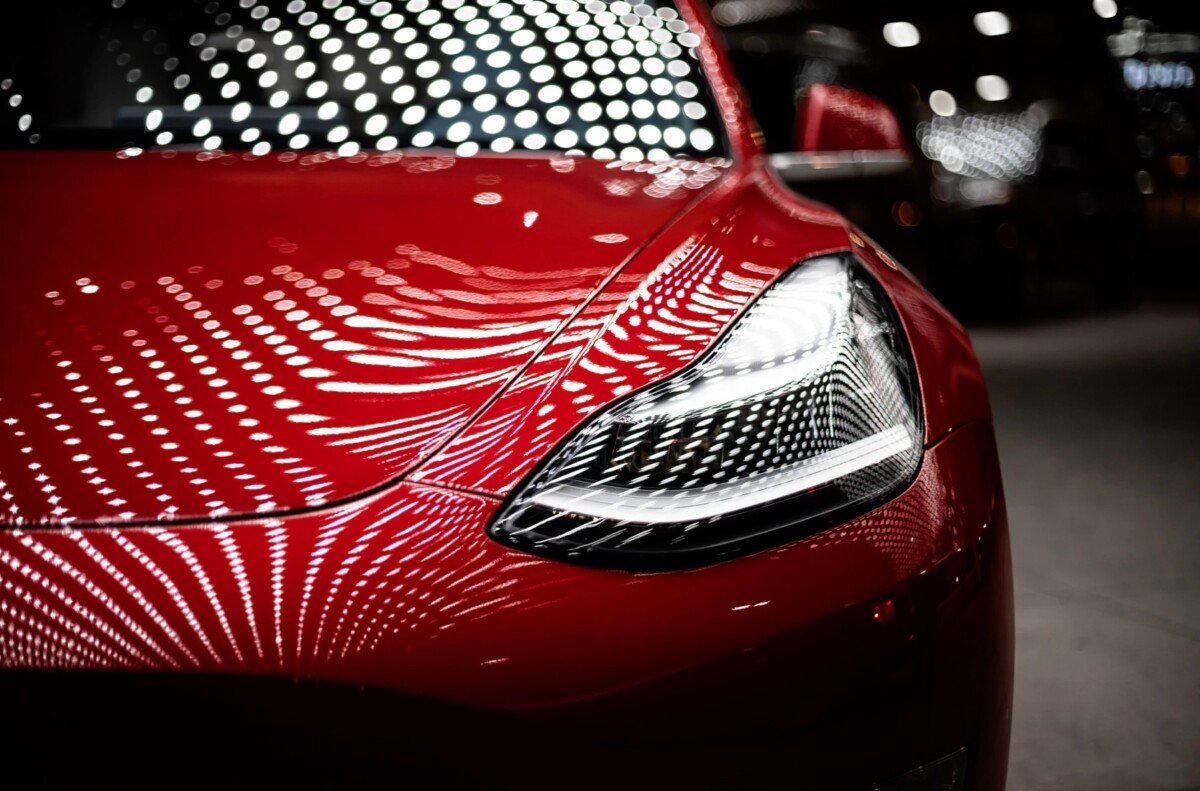 The 79 kWh battery that equips the Tesla Model 3 Performance gives it a range in the WLTP cycle of 547 kilometers. In practice, and with a little highway, it will be difficult to exceed 400 kilometers serenely. Off the highway, you can approach 500 kilometers if you play the eco-driving game, but you should not abuse the 510 horsepower under the right pedal. 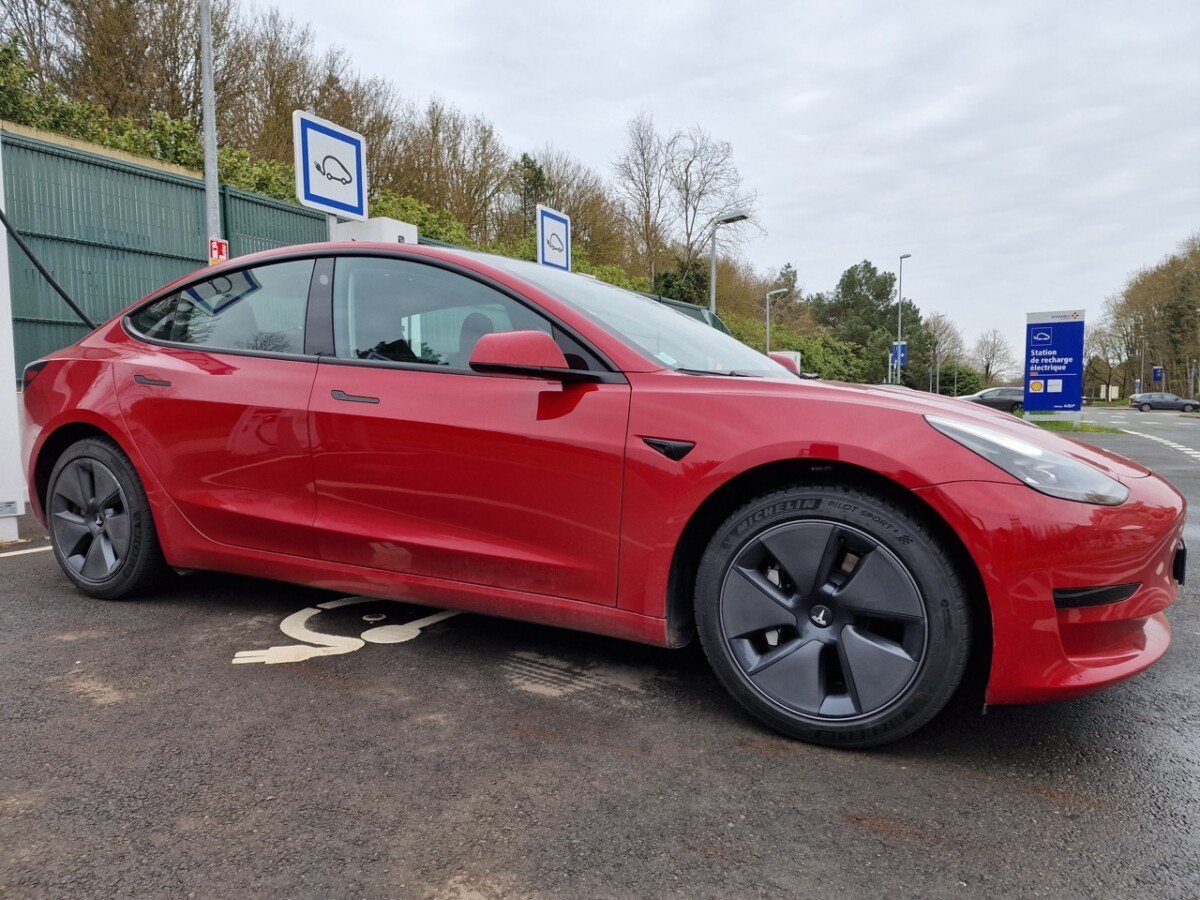 Fast charging is also a differentiating point between the two vehicles. On the Tesla Supercharger network, the Tesla Model 3 Performance will accept up to 250 kW of power, compared to only 175 kW for the Model 3 Propulsion. In practice, this will translate to between 10 and 15 minutes more charge in total over a 500-kilometer journey. 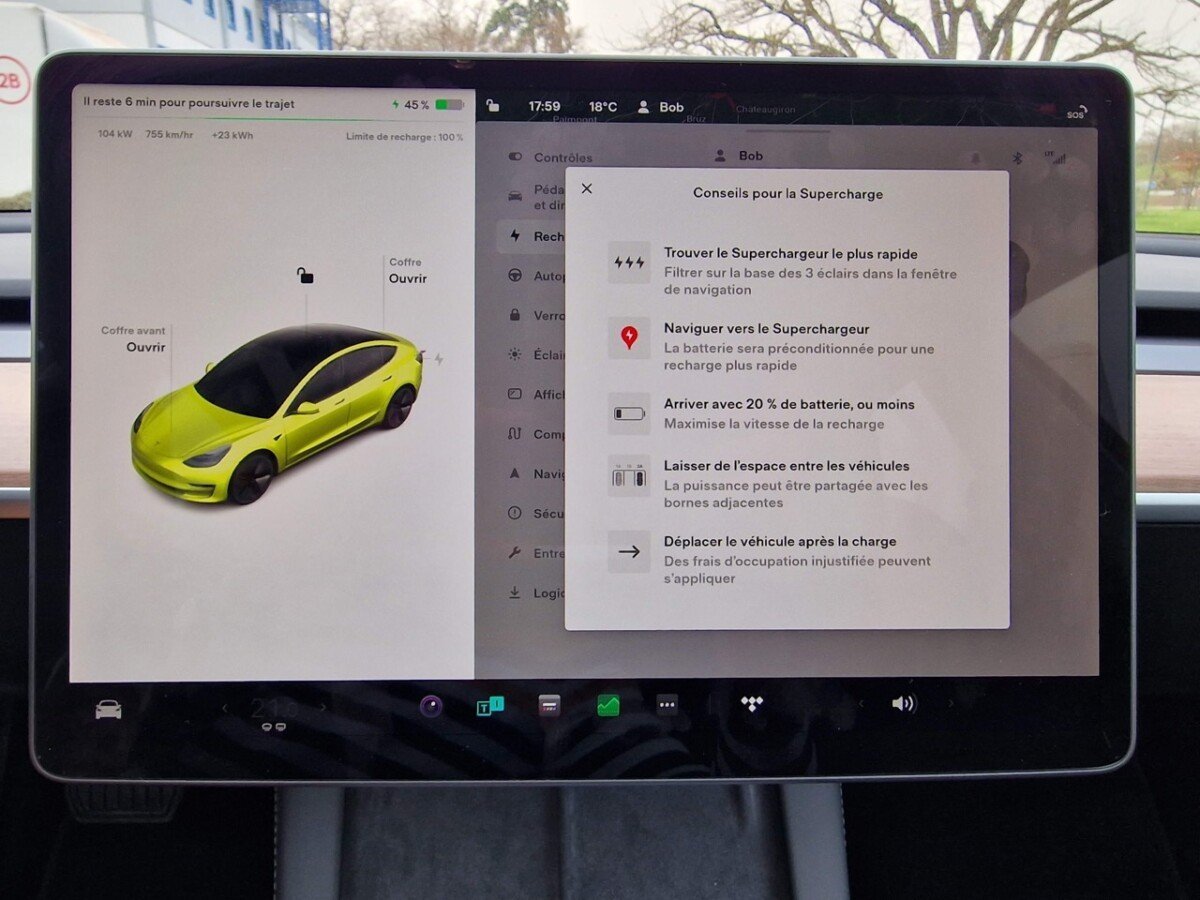 The onboard charger is the same on both vehicles and allows charging at a maximum power of 11 kW in alternating current. This will ensure a full charge in 8 hours for Performance and 6 hours for Propulsion. On a domestic outlet, count 5% of battery recovered per hour of charging for the Tesla Model 3 Propulsion and 3% for Performance. 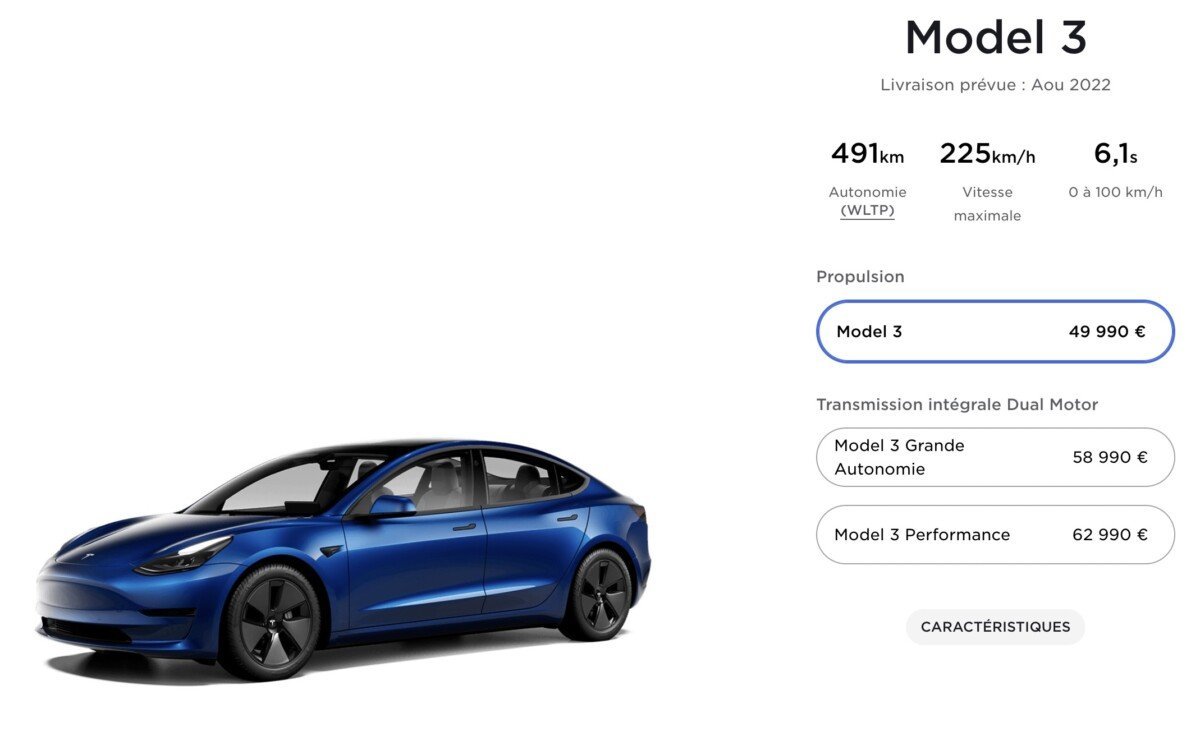 Paintwork (1,190 euros), white interior (1,190 euros), and self-driving options (upgraded Autopilot at 3,800 euros and fully autonomous driving capability at 7,500 euros) are the same on both versions of the Tesla Model 3.

The Tesla Model 3 Performance is available for 62,990 euros and is therefore excluded from any ecological bonus scheme, reserved for vehicles under 60,000 euros. The approximately 15,000 euros that separate the Propulsion from the Performance are a large sum and it is, therefore, advisable to bear in mind the advantages and disadvantages of each to help you make the best decision.

A few months ago, the conclusion of this comparison would have been very different. When the Tesla Model 3 Propulsion was much cheaper, the extra cost for a Performance version reached more than 25,000 euros. Today, with a difference of 15,000 euros, the question can be reconsidered. 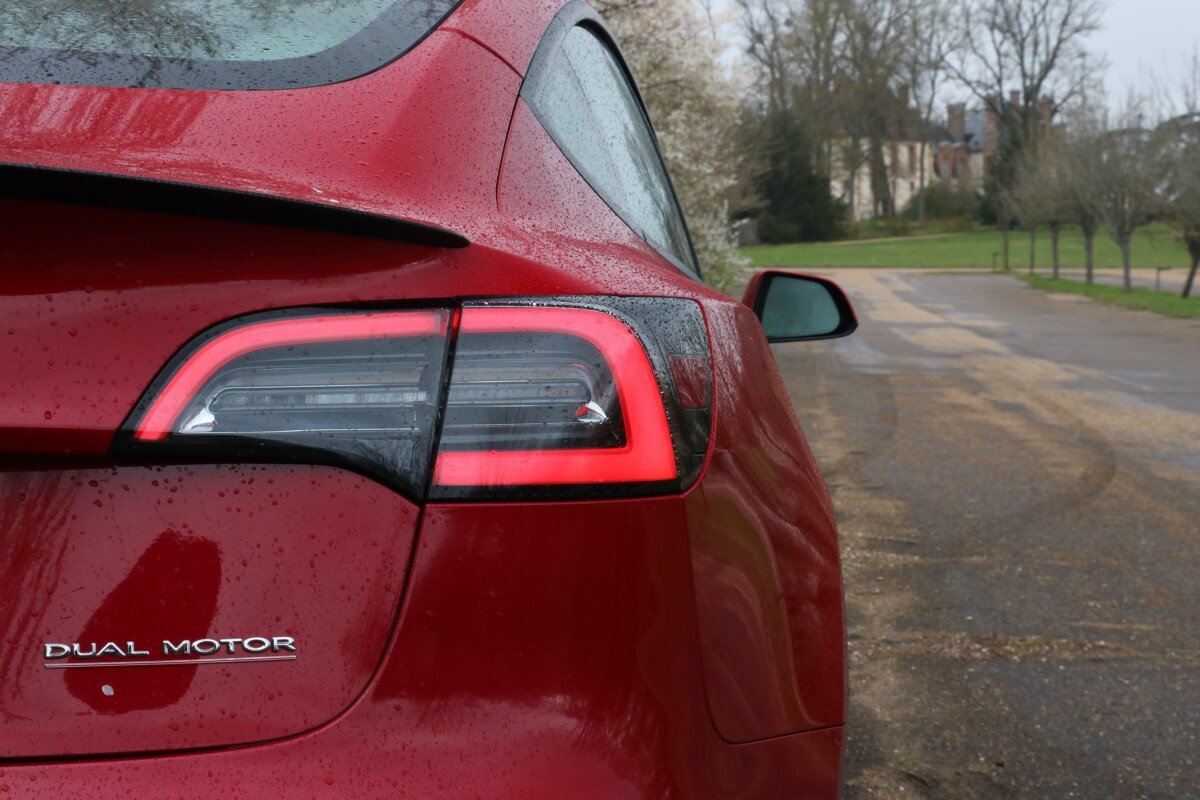 In addition to the small exterior aspects (rims with a more elaborate design, spoiler, or even lowered chassis), the driving sensations will be very different when you put your foot on the floor. With its all-wheel drive, its track mode, and its dazzling acceleration, sports driving enthusiasts will be truly enchanted by the Tesla Model 3 Performance.

On long journeys, its larger battery will also be an asset, with faster charging and stages that can be longer between two Supercharges. The counterpart will be, on a daily basis, a little higher consumption, but it is the price to pay to have this level of sports performance. Those who can afford the additional cost of 15,000 euros will probably have no regrets once behind the wheel of the Tesla Model 3 Performance, which wins this comparison.