English
Home
/
NEWS
/
According To The Head Of Technology, 4680 Production At Tesla Is Progressing – And Is Not Yet Important For 2022

According To The Head Of Technology, 4680 Production At Tesla Is Progressing – And Is Not Yet Important For 2022 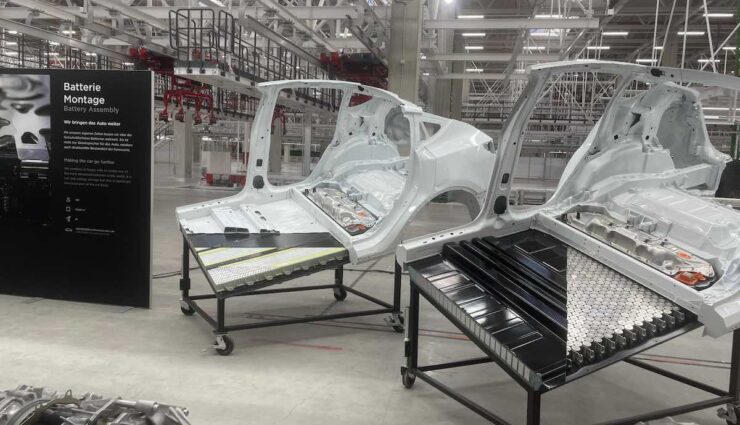 Tesla has now almost traditionally answered the questions that private and professional investors previously submitted via a web platform in the telephone conferences after the publication of its quarterly figures. One of the things that interested her the most for the second quarter of this year was how the production of batteries in the 4680 formats for carrying batteries is progressing, which began in the summer of 2020 at a pilot plant in Fremont. On Wednesday evening, Tesla CEO Elon Musk and his technology SVP provided information: There are significant advances - and the increasing demand for the rest of 2022 is also covered without any batteries of your own.

The first goal for in-house production that Tesla announced on its battery day in September 2020 was 10-gigawatt hours of annual capacity at the Fremont pilot plant by the end of 2021. By the end of 2022, it should be 100-gigawatt hours at several locations, including the new gigafactories in Germany and Texas, as later became clear. Apparently, Tesla fell far short of the first goal, and even that by the end of this year is unlikely to be achievable. The battery building on the German Gigafactory site is not even finished yet.

In Germany, Musk had already announced before the official opening of the local factory this March that, contrary to what was initially planned, the Model Y will not be produced there with a carrying battery from its own 4680 batteries. The new Gigafactory in Texas, on the other hand, started a good two weeks later with Model Y with a 4680 battery. However, initially, only a few copies were handed over to external customers, which spoke of insufficient battery availability. Deliveries from Texas only picked up in June – but meanwhile, Tesla has temporarily switched to the conventional construction there as well, as in Grünheide (the photo above from the German factory shows both compared with the 4680 packages in the foreground)

In this respect, it is no wonder that shareholders submitted many 4680 questions on the occasion of the Q2 conference on Wednesday. First, Musk should explain what exactly he meant when he recently wrote on Twitter that the structural battery pack from his own batteries has not yet been optimized. The architecture with the battery as part of the supporting vehicle frame is fundamentally superior, explained the Tesla boss. In their current form, they do that better than electric cars with batteries as pure additional weight. However, there is still a lot to be worked out, not only on the battery pack itself but also on its integration with the rest of the frame.

Musk and his technical director Baglino made similar comments about the batteries themselves and the production. In the second quarter, Tesla fully automated a key process for dry coating electrodes, Baglino reported. This has enabled significantly more production and yield in Fremont - since March a 35 percent increase in volume every month. The pilot plant there should now reach “1000 per week” well before the end of 2022. The SVP did not name a unit for this, but he should have meant enough 4680 batteries for 1000 Model Y, i.e. around 6-8 gigawatt hours depending on the battery size. According to Baglino, the battery systems in the Gigafactory in Texas have now been completely installed and are being put into operation. 4680 production there is expected to begin this quarter and capacity will be higher than Fremont's before the end of the year.

4680 production is not important yet, according to Musk

But like the package, the individual 4680 batteries for it are only the first version, Baglino said, when asked about possible hidden potential in the Model Y with 4680 battery from Texas. The focus has been on simplicity and scaling, which is why Tesla is not yet exhausting all the possibilities of the format, he explained. A dozen small issues would hamper the ramp-up, added CEO Musk. We are confident that we can solve them, even if that is difficult with a "revolutionary" concept like this one. First Tesla wants to get the base under control and achieve high volume and reliability and later rapidly develop its own cell to increase energy density and reduce costs.

Tesla has also planned a lot more for batteries. But perhaps to reassure shareholders, Musk emphasized in his introduction to the conference on Wednesday that the company has enough supplied batteries for the entire vehicle production for the rest of this year - and Tesla is supposed to buy new ones in the remaining months to achieve the record. 4680 will be important next year, but not yet in 2022, Tesla's boss said.