Delivered in Japan: Tesla Model Y from China is now the largest new market in the Asia Pacific 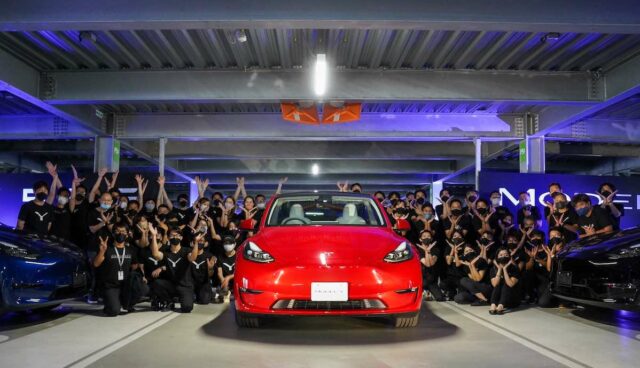 Tesla's Gigafactory in China is expected to set a new production record this quarter - August's 76,605 Model 3 and Model Y may not be as clear as expected, but September will basically be the same as February this year For the first month, the plant can run at full capacity after the corona outage in March and the switchover in July and August. Nonetheless, it is already foreseeable that fewer Model 3s and Model Ys will arrive in Europe in the third quarter than in the first quarter of this year: recently, the full range of Teslas was shipped from China to the Asia-Pacific region. The last and largest of the four new markets is Japan — where the first Model Y has also been delivered to customers, according to Tesla.

Tesla also changed the configurator in four Asia-Pacific markets in June this year, after European customers were able to place orders for the reserved Model Y, which will be in service from August to summer 2021: the model is available in Australia, New Zealand, Singapore And Japan becomes Y can be ordered. More recently, three-quarters of customers in these new countries have reported their first deliveries, and last week Tesla announced the start of Model Y deliveries in Japan.

This first happened via the company's Japanese Twitter account and was also picked up by global accounts a day later. In addition, Mizuno Hiromichi, who is from Japan and has been a member of Tesla's board of directors since April 2020, broke the news. He added that eight years after the first Model S was delivered, the "S3XY" series in his home country is finally complete.

As with the million-dollar milestones that have become more frequent recently, Tesla started off in Japan with a red Model Y flanked by waving black-clad employees. Like electric cars in Australia, New Zealand and Singapore, it should come from a Chinese gigafactory. Australia is the second of four new markets for the Model Y, with deliveries starting in mid-August, The Driven reports. The seventh Tesla ship from China should be there by the end of the month. At least 10,000 Model 3 and Model Y units are expected to be sold in the third quarter, with most of them in August.

In late August, at least one ship was also spotted offloading the Model Y at a port in Japan, so Tesla sales could pick up there as well. There are two other new markets, New Zealand and Singapore, which are smaller but have above-average wealth. On the other hand, this means that Tesla's production in China is reduced for Europe. After registering around 60,000 new Model 3s and Ys in the first quarter of 2022, Tesla plans to send just eight ships to Europe in the third quarter, for a total of around 28,500 electric vehicles, according to teslamag.de. In addition, the new German Gigafactory also has Model Y production, which should not be enough to cover the deficit in China.