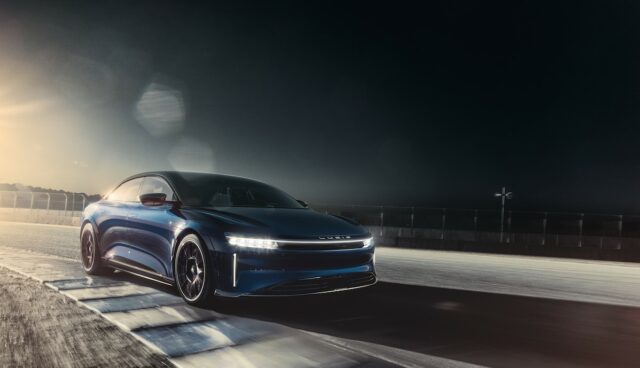 With its Air limousine, the Californian electric car manufacturer Lucid, managed by the former head of technology for the Model S, has achieved a feat: The car has a longer range than the best Tesla in this respect, charges with higher performance and is also more efficient. So far, Tesla has only been ahead in terms of acceleration with the new Model S Plaid, but that is also changing now: Lucid has introduced the new Sapphire version of its Air, which is said to reach 60 miles per hour at least as fast as the Tesla and up the quarter mile should be even faster - albeit at a steep price.

Lucid a quarter mile ahead of Plaid Tesla

According to Tesla, the Model S Plaid is the fastest accelerating vehicle of any in production. This could be contradicted by the European startup Rimac, which declared its Nevera the "fastest accelerating production car in the world" after a direct comparison on the drag track in August 2021. However, the hyper-electric car also costs seven-digit amounts and should only just meet the series definition with 150 copies.

The Lucid Air Sapphire, on the other hand, should at least be affordable. The manufacturer quoted the price as $249,000, which is a good $100,000 more than for the Model S Plaid. Without mentioning the competitor, Lucid makes it clear that their own electric car accelerates faster: "Under two seconds" to 60 miles per hour are stated in a message. This can also be done with the Tesla because the web specification is 1.99 seconds (with the rollout deducted). For the quarter mile, however, Lucid calls less than 9 seconds, while Tesla says 9.23 seconds for the Model S Plaid.

This means that another electric car will soon be setting the best times in the quarter-mile races that are popular in the USA. A plaid Tesla also managed the drag distance in less than 9 seconds but was modified for this. Deliveries of the Air Sapphire are scheduled to begin next year, according to Lucid. Only prices in American and Canadian dollars are mentioned, so the start in Europe is likely to be a long time coming. After all, Tesla should be able to maintain its leading position on the old continent for a while - according to information from the beginning of August, the first Model S Plaid should be delivered in Europe before the end of the year.

As with Tesla, the Lucid's stronger acceleration is achieved, among other things, by a second motor on the rear axle. According to the company, all three drives together achieve 1200 hp, which is also more than the Model S Plaid. According to Lucid, more detailed data and evidence for the performance of the Air Sapphire will follow. There is no information on the maximum speed and range of the powerful electric car. However, the company does point out that it comes standard with carbon-ceramic brakes so it can stop quickly enough.