English
Home
/
NEWS
/
Swimming at the Supercharger: Tesla sets up a container pool in a large charging park at Kreuz Hilden

Swimming at the Supercharger: Tesla sets up a container pool in a large charging park at Kreuz Hilden 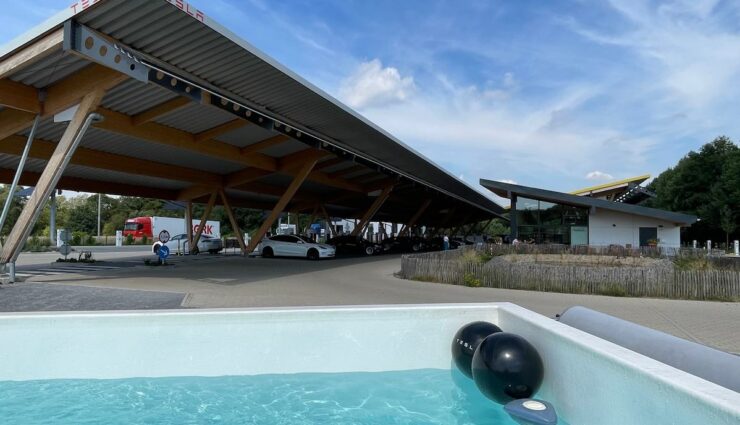 The Seed & Greet charging park at the Hilden motorway junction near Düsseldorf is one of the largest in Germany - and according to an award it won at the S3XY Cars electric car meeting in Hanover over the weekend, it is also the most beautiful. Travelers can meet their electricity needs here at 40 Tesla superchargers, 12 Fastned charging points, and 44 slower chargers, but there is also a bistro and a friendly outdoor area; Electricity for this is supplied, among other things, by photovoltaic carports and a huge battery on the edge. As the owner, the bakery entrepreneur Roland Schüren is responsible for the inviting and ecological design - but Tesla itself is now enriching the location with an additional attraction. 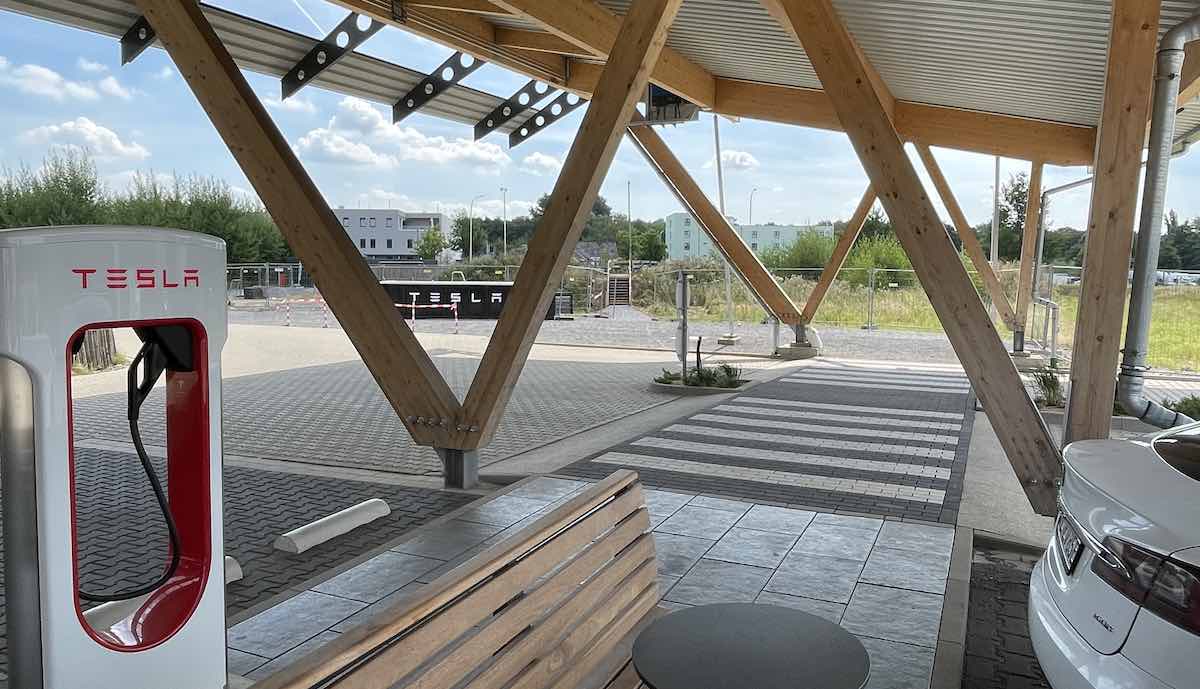 That was not supposed to be announced until later this week, but the first visitors to social media reported the innovation in Hilden as early as Monday, and Schüren then had no choice but to confirm it: There is now an additional container at the edge of his loading park, which can be used for bathing while charging. "Pack bikini and swimming trunks in your hand luggage," the operator wrote on Twitter on Tuesday. The pool in the electric car park will be open from this Thursday at 2 p.m.

Even the inscription in the typical letters on the side suggests that in this case, Tesla itself is behind the charging park upgrade. At the request of teslamag.de, Schüren also confirmed that. He only made the preparations and then had Tesla bring the water container. The company even provides the towels, which are then picked up daily by a local laundry. And in Hilden there will probably be something like supercharger lifeguards for the first time in the world: According to Schüren, Tesla is sending staff to the pool to keep an eye on users.

Among other things, the Tesla lifeguards should make sure that it doesn't get too crowded on hot days - according to a sign, a maximum of four people are allowed in the approximately 8 by 2.5-meter container at the same time and you are only allowed to go there for ten minutes during the day shop. Children under the age of 12 must be accompanied by an adult, and babies and toddlers must also wear "appropriate swimwear", explained in German and English. And in fact, the use of one of the 40 Supercharger columns at the location is, so to speak, the ticket for the mini swimming pool: If you want to swim, you should use the Tesla app to prove to the team on-site that you are also charging.

Supercharger swimming only until the end of August

Strictly speaking, not even those electric car drivers who charge at the AC columns and sockets that Schüren operates in his charging park are allowed to use the Tesla pool. After all, you don't necessarily have to drive a Tesla to take a bath while charging: The location in Hilden is one of those superchargers in Germany that are already approved for third-party electric cars. However, the pool fun is limited in time: According to the sign in front of it, it is only open from Thursday to Sunday from 2 p.m. to 7 p.m., and on August 28th the swimming pool season at the Supercharger ends for the time being.