Tesla Factory In China Is Revving Up: 10,000 Model 3 And Model Y Ready For Ship Transport 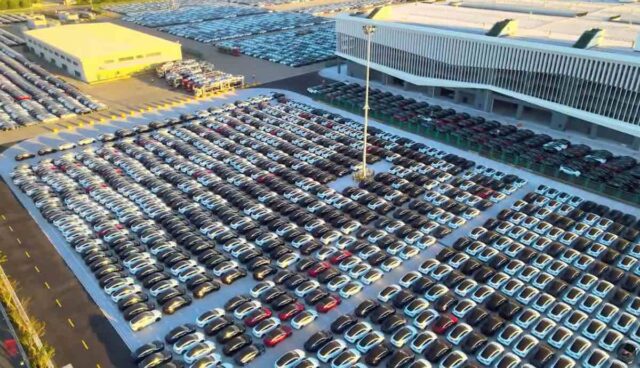 According to the company, the Tesla Gigafactory in Shanghai set a new record in June - only to drop again significantly in July because first the lines for the Model Y and then for the Model 3 were rebuilt with the aim of significantly increasing production. This work has now been completed, as can be seen, for example, from a port parking area very close to the Tesla factory: An observer counted at least 10,000 Model 3 and Model Y there now, more than ever, waiting to be transported by ship before.

In July, around 7,000 Tesla electric cars were seen twice at the Nangang terminal of the Luchao port in Shanghai. It is only about 10 kilometers from the Gigafactory and has been used to ship Model 3 and Model Y for about a year. And as soon as the conversion work in the nearby factory is complete, the number keeps growing: last week, the observer @SawyerMerritt counted more than 8,800 Tesla electric cars in the port parking lot in a drone video. And after the latest overflight of the area this Friday, it came to more than 10,000.

You will have to or may get used to such pictures because according to reports, the new capacity of the Chinese Gigafactory is 14,000 Model Y and 8000 Model 3 per week – projected over a year to more than 1.1 million. In order to produce 10,000 electric cars, as they are now on the port side, Tesla only needs a little more than three days there. In addition to Luchao, the port of Taicang further north is also used for ship transport.

From there, one of the relatively few ships that Tesla is sending from China to Europe this quarter left at the end of July. On the one hand, the lower number is due to the fact that production in July was not yet high due to the conversion work. On the other hand, the Model Y from the Chinese Gigafactory has recently also been shipped to Australia and New Zealand. In addition, Tesla apparently wants to serve the domestic market more, because the estimated waiting times for Model 3 and Model Y according to the web configurator were reduced by four weeks each this week.

Not all Model Y in port for Europe

By no means everything that has recently rolled out of the Chinese Tesla factory at an increased rate is intended for export - and not all Model Y in the two ports are intended for Europe. According to information from teslamag.de at the end of July, only eight European transports from China with a total of around 28,500 Model 3 and Model Y were planned for this quarter, the last of which should be produced at the beginning of next week. If the increased production in China runs smoothly, there should be a lot more again in the fourth quarter. There is also Model Y from the German Gigafactory. The Long Range variant is now also being produced there, and operations in three shifts are scheduled to begin before the end of the year.