Three new electric cars for Germany in 2022: BYD starts with two SUVs and a sedan 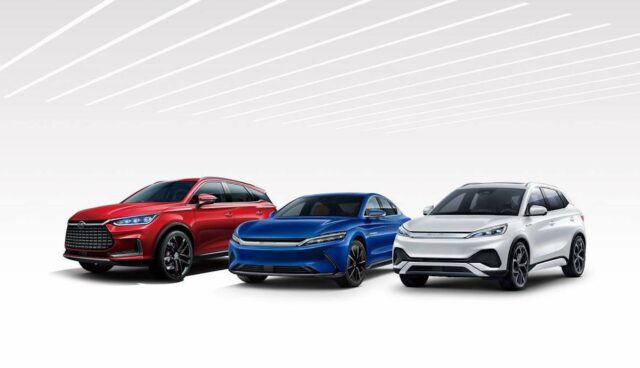 BYD, the second largest manufacturer of pure electric cars after Tesla wants to start in Germany in 2022. After the Swedish partner Hedin Mobility provided general information about these plans at the beginning of August, including first deliveries before the end of the year, BYD has now published the model range (see photo), with which the expansion to Germany and other European countries is to begin.

Three-quarters of the Tesla range covered

Unlike Tesla, BYD also understands plug-in hybrids as electric cars. If you take that into account, the Chinese company was already the largest manufacturer in the world in the first half of 2022. But it wants to come to Europe anyway purely electrically. And the three models intended for this purpose, which BYD has now presented, roughly cover three-quarters of the Tesla range.

A BYD counterpart for the Tesla Model 3 is missing for the time being, but the Atto 3 is supposed to be an electric car that could compete with the Model Y – at least at its lower end with the version with a smaller battery that has just been launched in Europe. However, the BYD crossover is smaller than the Model Y and has significantly less power. It would therefore probably compete directly with the VW ID.4 and its corporate offshoots.

Another SUV, but in a larger format, is the BYD Tang. It has been available in Norway since last year, and now Germany, Sweden, Denmark, and Israel are to follow, each with local partners. The purely electric car has seven seats and, at 4.87 meters, is a bit shorter than the Tesla Model X. When it comes to acceleration, the Tang is more likely to mess with it, at least with the version without the new Plaid drive: 4.6 seconds 0-100km/h.

Finally, the BYD Han can best be compared to the Model S. At just under 5 meters, it is almost the same length and can also keep up with the Tesla acceleration without a plaid. Like the Tang, however, it is limited to 180 km/h, the smaller Atto 3 even at 160 km/h.

No prices for BYD electric cars yet

You tend to have to make compromises compared to Tesla in terms of range and charging speed. All three electric cars for Europe are equipped with LFP batteries, from which BYD is getting ever higher energy densities through efficient integration - possibly soon as a battery supplier for a new Model Y for Europe. In the European trio, however, the SUV Tang already has the largest capacity with 86.4-kilowatt-hours - not much for a vehicle of this class and size. The WLTP range should be 400 kilometers. The BYD Han comes with almost the same size battery 521 kilometers, and the Atto 3 with 60.5-kilowatt-hours 421 kilometers. Charging from 30-80 percent should take half an hour, which speaks for power below 100 kilowatts.

Thus, the electric car core data of the opening trio from BYD are known for Europe, and they indicate that the company is not initially drawn into the premium segment. But they sound solid, and mass models may be more needed than increasingly expensive Teslas. In the current announcement, BYD confirms that deliveries in Europe and thus in Germany should begin in the fourth quarter. However, the company left the prices for its first three European electric cars open for the time being.