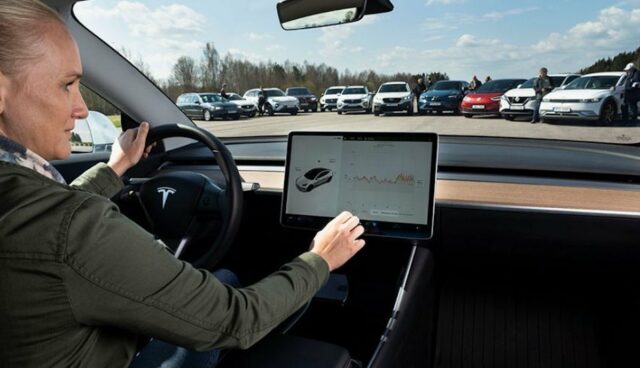 Tesla electric cars are operated in a modern and elegant way. Instead of the usual buttons and levers, there is mainly a large touchscreen that controls practically all functions. In fact, the screen example sets a precedent, although other manufacturers are less consistent in reducing the number of physical controls. The ADAC recently found that Tesla's omission of this goes much too far. Now a Swedish magazine has similarly compared cockpit concepts - and concluded that operating an old Volvo is the least distracting.

According to its own statements, Vi Bilägare is Sweden's largest car magazine and is independent of all manufacturers. The test with touchscreens from Tesla and others was also published on the Internet this week in English. Designers want the clean look and finance departments to want the lower cost of switchless cockpits, it says. But in each of the 11 modern cars tested, this concept resulted in longer distractions on simple tasks than in the 2005 Volvo V70.

Unlike the ADAC, this test took place while driving and the participants were able to familiarize themselves with the operation of the respective car beforehand. Drivers should turn on the heated seats, increase the temperature by 2 degrees, start the window defroster, tune to a specific radio station, reset the trip computer and dim the instrument lights and turn off the main screen. It took the longest in the test for the vehicle with the largest screen: In the MG Marvel R electric car, 45 seconds passed before all tasks were completed, writes Vi Bilägare.

At the test speed of 110 km/h, this corresponded to a distance of almost 1400 meters, while the person at the wheel of the Volvo V70 was finished after a good 300 meters. Tesla is not mentioned as particularly good or particularly bad in the test and ended up in the middle with the Model 3. Competitors Dacia Sandero, Volvo C40, Subaru Outback, and Mercedes GLB had to admit defeat with 717 meters to completion (after 23.5 seconds). The simple Dacia was the best of the modern cars after the old Volvo and just ahead of the new C40 with 13.5 seconds and thus 414 meters.

"BMW interface one of the most complicated"

Physical operation is still needed for frequently used and safety-related functions, wrote the ADAC at the end of July, and the Swedish testers also state that this is "far superior" in terms of safety. But it also obviously depends on the implementation. BMW, for example, continues to use buttons and sliders in addition to new touchscreens and came second in the ADAC test with the 1 Series (despite the score of 5.1 in infotainment) behind the Mazda 3. The Swedish tests now featured the iX electric car with a similar combination - Service there. According to the report, the user interface at BMW is one of the most complicated ever. 30.4 seconds passed and 928 meters had been covered before the task list was completed.